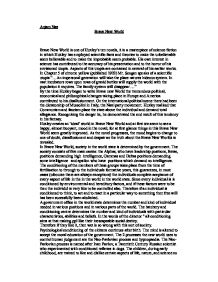 Brave New World is one of Huxley's ten novels, it is a masterpiece of science fiction in which Huxley has employed scientific facts and theories to make the unbelievable seem believable and to make the improbable seem probable.

Anjam Naz Brave New World Brave New World is one of Huxley's ten novels, it is a masterpiece of science fiction in which Huxley has employed scientific facts and theories to make the unbelievable seem believable and to make the improbable seem probable. His own interest in science has contributed to the accuracy of his presentation and to the horror of his envisioned utopia. Aspects of this utopia are contained in several of his earlier works. In Chapter 5 of chrome yellow (published 1922) Mr. Scogan speaks of a scientific utopia "...An impersonal generation will take the place natures hideous system. In vast incubators rows upon rows of gravid bottles will supply the world with the population it requires. The family system will disappear ..." By the time Huxley began to write Brave new World the tremendous political, economical and philosophical changes taking place in Europe and America contributed to his disallusionment. On the international political scene there had been the dictatorship of Mussolini in Italy, the Nazi party movement. Huxley realised that Communism and fascism place the state above the individual and demand total allegiance. Recognising the danger he, he demonstrated the end result of this tendency in his fantasy. Huxley creates an 'ideal' world in Brave New World and at first we seem to see a happy, almost buoyant, mood in the novel, for at first glance things in this Brave New World seem greatly improved. ...read more.

they'll be safe from books and botany all their lives". The conditioning of the children forms a barrier in their minds, so that they are never free to decide for themselves, but are always bounded by the instructions of the state, and more times then not the people of brave new world do not even know it. Hypnopaedia is another form of psychological conditioning. It is used to teach moral education. While they sleep, the children of the new world are drilled with moral education such as "when the individual feels, the community reels, [and] ...cleanliness is next to fordliness. These phrases are repeated thousands of times throughout childhood "till at last the child's mind is these suggestions ... the mind that judges and desires and decides...". Psychological conditioning in the new world is much like the television programs and advertisments of today. The programs repeatedly tell their viewers to consume name brand material and to follow the lifestyles of the characters in the programs while the true masterminds slowly take away their devoted members' hard-earned wealth. The psychological conditioning limits the mental freedom of the citizens so that they are never at liberty to decide what they want for themselves. Thomas Jefferson once said, "all men are created equal". Equality, however, fails to exist in the imperfect society created by humans. Just as there are social classes in today's society, citizens of the World State are categorized into distinct social classes (Alpha, Beta, Gamma, Delta and Epsilon) ...read more.

The entire population has sexual fulfilment also. But is it right to force people into 'happiness'? The entire core of the book is the argument on happiness between the controller and the savage. They argue like intellect scholars to name the name the nature of happiness in society. Bernard argues 'why do u not let them read Othello instead?' and then comes the directors explanaition, '....you cnt make tragedies without social instability. The worlds stable now. People are happy...' these world underscore the whole idea of why human life is left to its own devices. We realise that everything is done so there is no rebellion against the state, and even the controller admits that Othello is better then the feelies but he says 'but that's the price we have to pay for stability...' As they continue the conversation, (pg201) we begin to see that even the controller knows what 'true happiness' is, he realises that to be genuinely happy you need the fight against misfortune, a struggle with temptation, a fatal over throw by passion or doubt' and he concludes 'happiness is never grand' Even now as science is ever growing People facing the 21st century are trying to determine whether these new realities of life will enhance it and bring life as they know it to a great unprecedented level, or if these new products will contribute and perhaps even cause the destruction of society and life. ...read more.