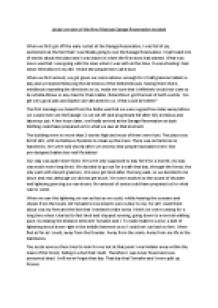 Transfer-Encoding: chunked ﻿Linda?s version of the New Mexican Savage Reservation incident When we first got off the early rocket at the Savage Reservation, I was full of joy, excitement at the fact that I was finally going to see the Savage Reservation. I had heard lots of stories about the place and I was drawn in when the first story had started. What was more was that I was going with the man whom I was with at the time. It was a feeling I had never felt before in my life. I think the people here call it love. When we first arrived, we got given our soma rations- enough for 2 half-gramme tablets a day and we started following the directions of the Delta-Minuses. ...read more.

So we set off and progressed hill after hill, a tedious and laborious job. A few hours later, we finally arrived at the Savage Reservation at dusk. Nothing could have prepared us for what we saw at that moment. The building were no more than 2 stories high and most of them were huts. The place was full of dirt, with no Deltas or Epsilons to clean up the mess. There was no factories or hatcheries. We were told shortly after we arrived, that people had babies here. Not pre-designed babies but real life babies! Our stay was quite short-lived. We were only supposed to stay here for a month, my stay was much more long-lived. ...read more.

I think we were running for a long time when I started to feel tired and stopped running, going down to a normal walking pace, increasing the distance between Tomakin and I. To make matters worse, a bolt of lightning struck down right in the middle between us so I could not run back to him. I then fled as far as I could, away from the thunder. Away from the soma. Away from my life in the hatcheries. The social services then tried to look for me but at that point I was hidden away within the maze of the forest, hiding in a hut that I built. Therefore I was never found and was presumed dead. I will never forget that day. That day that Tomakin and I were split up forever. ...read more.