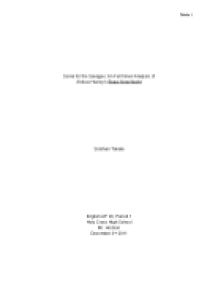 ﻿Takala Soma for the Savages: An Full Novel Analysis of Aldous Huxley?s Brave New World Siobhan Takala English AP 20, Period 1 Holy Cross High School Mr. Hodson December 3rd 2011 Karl Marx once said, ?The production of too many useful things results in too many useless people?. Aldous Huxley?s novel Brave New World depicts a utopia that has come to completely rely on technology to run their world. This advanced and civilized world has made living thoughtless. Citizens look to Henry Ford as a deity and the years are based off the making of the Model T. Children are produced on an assembly line and are chemically balanced to fit a specific social class in society. There are five classes in the brave new world: Alpha, Beta, Gamma, Delta, and Epsilon. To dehumanize citizens even further they take a drug, called soma, to relieve any pain, emotional or physical, in their lives. Through Huxley?s style, technique, and structure he accurately portrays a brainless society in which humanity has been replaced with constant technological advances. Huxley uses many techniques in his novel to help support his theme of humanity being superseded by technology. One of the most important techniques is irony. There are examples of it throughout the whole novel. Huxley also uses point of view, illusions, and allusions to display his theme. He uses these literary techniques to support his theme and to keep the novel focussed on the message he wants to portray to the readers. Therefore, Huxley deliberately uses techniques to solidify his main theme. One of the techniques Huxley uses in Brave New World is point of view. Huxley uses third person omniscient as the point of view to ensure the narration supports his theme. In addition, it allows the setting to shift without changing the outcome of the novel. This technique is shown when Huxley switches back and forth from the Savage Reservation to the brave new world. ...read more.

This shows the contrast Huxley was working towards depicting; how different a world completely reliant on technology is from one that still has a grasp on its humanity. Illusion is another technique used in Huxley?s Brave New World. He uses it in the depiction of age in the brave new world. In the new society, people do not appear to age, but their bodies still do. Huxley?s intention with this is to show contrast between the World-State and the Savage Reservation. When Lenina and Bernard visit the Reservation, Lenina sees an old man and asks ?what [is] the matter?(95) is. Bernard then explains that in the new world they ?keep their internal secretions artificially balanced at a youthful equilibrium?(95). This means they do not appear to age in the World State, but when their bodies reach a certain age they still die like the savages. So, in the brave new world, age is therefore an illusion because it is a false truth. People appear young, but really are old. Huxley does this intentionally to show how the new society thinks ?its terrible?(95) to follow natural human life. Thus, Huxley uses illusion to display his theme of technology replacing humanity, through the World-State not accepting the natural cycle of life. Huxley displays his theme of humanity being replaced by technology through the way he presents characters in Brave New World. In the novel, Bernard Marx is an outcast in society who is said to have ?alcohol[?]put into[?]his blood surrogate?(52) and did not ?respond properly to conditioning? (76). This is the excuse others have for him being odd compared to the themselves, and for him questioning humanity and seeking a greater meaning to life. There are two things shown in this: the new world is not perfect, and there is still hope for humanity. First, the fact that Huxley chose Bernard Marx, an alpha plus, to show imperfection is quite deliberate. ...read more.

In ?hypnopaedia?(20), the phrases are short and simple and are constantly repeated in the new society. An example of this is ?a gramme is always better than a damn?(77). This saying means that it is better to be high in the new world than to care enough about something to be upset. This phrase is heard more than once throughout the novel showing pattern, and syntax. The phrases depict the thoughtless world very easily and help readers sympathize with John when he reads Shakespeare. Huxley?s choice in Shakespeare as a contrast to the hypnopaedia is another example of syntax. He uses quotes from ?Othello?(210), The Tempest and even mentions Romeo and Juliet. The flowing and intellectual syntax that is in John?s dialogue when speaking of Shakespeare contrasts that of the ?hypnopaedia?. It shows how much they actually have lost. Rather than the rich, complex thoughts and language of Shakespeare, they have been reduced to simple slogans and propaganda. Thus, Huxley uses syntax to depict how the brave new world is really a dystopia. He does this by displaying ?the price [citizens] have to pay for stability?(194) in their technologically dependent world. Thus, Huxley?s style enables him to further the reader?s understanding of how much technology has replaced in the new society. His use of diction, syntax and patterns all help keep the novel unified and focussed on one theme. Huxley?s style is very important and cannot be overlooked when analyzing the novel?s theme. Huxley?s style, techniques and structure accurately portrays a lifeless society in which humanity has been superseded by technology. Civilized people take soma to control emotions, to the point that have no sense of true happiness or love. The world has become monotonous with its lack of individuality, as ?everyone belongs to everyone else?(40). Furthermore, the society is regressing from too many technological advances, making the brave new world lose its humanity. Huxley therefore shows readers that technology replacing humanity is not something to aspire to, and that the society today could become this, if it does let technological advancement become its priority. ...read more.