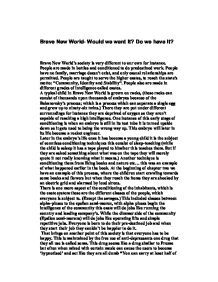 Brave New World- Would we want it? Do we have it?

Brave New World- Would we want it? Do we have it? Brave New World's society is very different to our own for instance. People are made in bottles and conditioned to do predestined work. People have no family, marriage doesn't exist, and only casual relationships are permitted. People are taught to serve the higher castes, to reach the state's motto: "Community, Identity and Stability". People also are made in different grades of intelligence called castes. A typical child in Brave New World is grown on racks, (these racks can consist of thousands upon thousands of embryos because of the Bokanovsky's process; which is a process which can separate a single egg and grow up to ninety-six twins.) There they are put under different surroundings for instance they are deprived of oxygen so they aren't capable of reaching a high intelligence. One instance of this early stage of conditioning is when an embryo is still in its test tube it is turned upside down so it gets used to being the wrong way up. ...read more.

(Except the savages.) This included classes between alpha-pluses to the epsilon semi-moron, with alpha pluses begin the intelligence of the community this caste will do jobs like running the country and leading company's. While the dimmer side of the community (Epsilon semi-morons) will do jobs like operating lifts and simple repetitive jobs. Everyone is born to do their pre-destined job and when they start their job they couldn't be happier to do it. That brings on another point of this society is that everyone has to be happy. This is maintained by the free use of anti-depressants one drug that they all use is called soma. This drug seems like a drug similar to Prozac but often when mixed with certain music can cause the users to become 'hypnotised' and act like they are all dumb "You can carry at least half of your morality about in a bottle". ...read more.

Since Mond had created the rules of the 'New World he could ignore the rules so he was not subject to them for instance he kept a cupboard in a safe full of past belongings (Bibles, other religious literature and anything that wasn't permitted anymore.) Of course we are no way near having a society quiet like Brave New Worlds. Yes we have the technology, which lets us clone people, but our society lets people choose their own life and it is lived out to how they want (to a certain extent.) More and more everyday we do start to get towards this sort of community. Relationships are failing more and short-term relationships seem "in fashion" more than meaningful relationships. Less people are bothered about religion than what they used to because they are tied up in work. More and more people are on anti-depressants than the past couple of decades. so in this I conclude that our community is on the way but still far, far away from Brave New World's. ...read more.