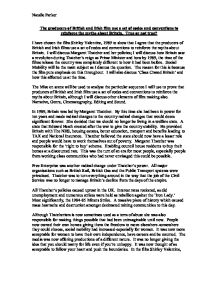 We then see her discover that her life isn't doomed to Groundhog Day and that she can still go places. By 1989, the time of the release of Shirley Valentine, Thatcher had only one year left to reign. The film continuously gives the audience evidence to prove it was set in a time just after the country had seen a revolution. By the 1980's, films like Shirley Valentine were fairly common. We were living in a class crazed country which had evolved from Thatcher's 'right to buy' scheme. People were now elevating themselves to higher classes believing it was their right as a homeowner, although realistically they were still in the same class as always. Women were rebelling against their stereotypical housewife roles and daring to be controversial, meaning divorce was becoming more accessible and popular. The codes and conventions are shown in all the macro and micro elements of British film making-Narrative and Genre, being macro elements and Mise en scene, Editing, Cinematography and Sound, being micro elements. The Narrative is ultimately 'the story.' However the Narrative is constructed in a certain way in order to tell the story in a way we understand. Shirley Valentine, a middle aged housewife with no other purpose in life but to cook steak and chips for her husband, wins an all expenses paid holiday to Greece where she finds her true self and breaks free from her faceless, meaningless life in Liverpool. ...read more.

Gillian's husband, Eric has to go to Brussels on business and she requires Shirley to feed their 'Vegetarian Bloodhound.' Gillian remarks on the trip as, "...such a bore, I said to him I really don't know why it couldn't be Paris or even Amsterdam." The street which Shirley lives on is a typical suburban street and the Mise en scene creates a typical 1980's house with lots of peach's and pink's, carpets with loud patterns and curtains draped in an equally loud pattern. A Street that would have no place for genuine aristocracy. A status the neighbour desperately aspires to be. As discussed earlier the 'right to buy' scheme introduced by Thatcher gave people the chance to choose not to be another council house resident-the same as everybody else. Margaret Thatcher once said, "There is no such thing as society, there are only individuals." I have discussed the 1980's and the state of the country during this time. I have discussed the things that became possible during this decade such as social mobility, a new desire to be a high class citizen and the lapse attitude people now had towards marriage and even life in general. I have explained Thatcher's policies and how the country saw a massive change in the way things were run and I have referred to a particular sequence in the film Shirley Valentine that reinforces the question being asked. The producers of British and Irish film do use a set of codes and conventions to reinforce the myths about Britain. Natalie Parker ...read more.