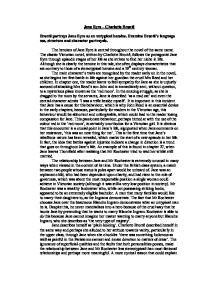 Jane Eyre - Charlotte Bront� Bront� portrays Jane Eyre as an untypical heroine. Examine Bront�'s language use, structure and character portrayals. The heroism of Jane Eyre is central throughout the novel of the same name. The classic Victorian novel, written by Charlotte Bront�, follows the protagonist Jane Eyre through episodic stages of her life as she strives to find her niche in life. Although she is clearly the heroine in this tale, she often displays characteristics that are contrary to those of a stereotypical heroine and a 19th century woman. The main character's traits are recognised by the reader early on in the novel, as she begins her first battle in life against her guardian the cruel Mrs Reed and her children. In chapter one, the reader learns to feel sympathy for Jane as she is unjustly accused of attacking Mrs Reed's son John and is immediately sent, without question, to a mysterious place known as the 'red room'. In the ensuing struggle, as she is dragged to the room by the servants, Jane is described 'as a mad cat' and even the central character admits 'I was a trifle beside myself'. It is important in this incident that Jane has a cause for this behaviour, which is why John Reed is an essential device in the early chapters, because, particularly for readers in the Victorian age, this behaviour would be abhorrent and unforgivable, which could lead to the reader losing compassion for Jane. This passionate behaviour, perhaps hinted at with the use of the colour red in the 'red room', is certainly unorthodox for a Victorian girl. It is obvious that this encounter is a crucial point in Jane's life, signposted when Jane comments on her resistance, 'this was an new thing for me'. This is the first time that Jane's rebellious nature has been revealed, which marks the start of a new episode in her life. ...read more.

This allows Bront� to satirise the class system by creating situations that make it appear ridiculous. An example of this is found in chapter 18 when Jane is excluded from playing a game when Lady Ingram proclaims 'she looks too stupid for any game'. The reader knows that Jane is intelligent and well educated enough to qualify as a governess. Because of this, the notion that, since she is of lower standing, Jane is stupid seems frankly ludicrous. The preposterous proposition that Jane 'looks too stupid', alludes to the superficiality of the upper class. In her preface, Bronte says 'appearance should not be mistaken for truth'. This is a theme that runs throughout the novel and a belief that Bront� holds in high regard. Bront� expresses this often through the dry humour of Jane. An example of this is Jane's musings on Blanche Ingram, 'Genius is said to be self-conscious. I cannot tell whether Miss Ingram was a genius, but she was self-conscious - remarkably self-conscious indeed'. Charlotte Bront� expresses her feelings about colonialism in the 1800's in the novel Jane Eyre. She does this by creating the storyline that weds Mr Rochester and Bertha Mason. Bertha Mason's family had made its fortune by exploiting slave labour (this is not overtly explained in the novel but it is implied). In finding a wife for Bertha, the Mason family, which had a history of insanity, took advantage of an inexperienced Mr Rochester and tricked him into marrying her. Rochester later describes Bertha Mason as 'coarse and trite' and her nature as 'alien to mine'. I think that, through Rochester, Bront� express her belief that, because of the way colonialists exploit human nature through slavery, they must be uncivilised and inhumane. The portrayal of Lowood School in Jane Eyre sparked a campaign for better conditions in Victorian schools. The food is described as 'abominable stuff' and 'a nauseous mess'. ...read more.

In Charlotte Bront�'s life she rejected no less than five marriage proposals; not only does this show that Bront� put parts of her life into Jane's but it also indicates that Bront� was a very courageous and resilient person. Bront� was an untypical woman and I think this helped her to portray Jane Eyre in the same way. At the start of Bront�'s career, she did not reveal herself to be the strong woman that we know she is, as she went under the masculine guise of Mr Currer Bell. This male pseudonym was necessary because of people like Robert Southey, who was the Poet Laureate of the time, who said 'literature cannot be the business of a woman's life'. Writing and reading went against the grain for what was expected of a women living in the 19th century. Bront�'s belief that women have the same rights as men is advocated through the voice of Jane in chapter 12,'women feel just as men feel'. Charlotte Bront� can also be seen as slightly unique for a famous person because, as she said of herself, she was quite plain looking. This is a characteristic that features in Jane to show that people can be attractive without being beautiful. I think that Jane Eyre is an unconventional woman because she has attitudes to marriage, status and the role of women in society, which are alien to her time. This is because her creator Bront� uses Jane as a vehicle to bring her own beliefs to the attention of her contemporaries and, hopefully, instigate change. Bront� uses different characters, storylines and coded language, such as the meaning of the phrase 'a woman's place', to satirise aspects of Victorian society. To get these points across, Bront� has to give Jane traits, such as passion and intelligence, which are considered unusual for a Victorian woman. These characteristics are never suppressed nor changed throughout the whole novel. Jane's individuality is retained, making her an untypical heroine considering the time that she lived in. ...read more.