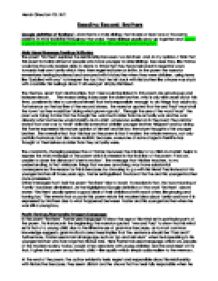 &quot;Brothers&quot; by Forster. The poem Brothers explores the relationship between two brothers

Reading Record: Brothers Google definition of 'Brothers': A brother is a male sibling; that shares at least one of the same parents. In most societies throughout the world, these siblings usually grow up together and spend a good deal of their childhood with each other, like playing and having fun. Main ideas/Message/Feelings/Attitudes: The poem 'Brothers' explores the relationship between two brothers and, in my opinion, I think that this poem is mainly aimed at people who have younger or older siblings because they, like Forster, would be the only readers able to relate to times that they have behaved in negative ways towards their own family which they then regretted later on in life. In the poem the narrator remembers feeling burdened and annoyed with his brother when they were children, using terms like 'Saddled with you' to interpret the fact that he felt stuck with his brother like a horse was stuck with a saddle: his feelings about it all were just simply dismissed. ...read more.

The overall effect that this has on the poem is that it makes the whole memory, not only partially humorous, but also more realistic because, everyone at some stage in their life has thought of themselves as older than they actually were. The constantly changing perspective of Forster, between the mindset of a child and adult, helps to express the main message of the poem which is stressed in the final line of the poem: 'I ran on, unable to close the distance I'd set in motion'. The message that this line teaches, to my understanding, is that miniscule things that we see as nothing, may have substantial consequences. The reason for this is because, by choosing to go with his friend Paul instead of his younger brother all those years ago, Forster extinguished the bond that he and his younger brother once possessed. ...read more.

Furthermore, Forster uses informal language such as 'go and ask Mum' when he is speaking to his younger brother who has forgotten his bus fare. Here Forster has used language which we, people of the modern society today, would often associate with young children and the end result of it is that, it gives the poem an authentic child - like quality which simply adds realism to the memory. At the end of the poem, the author evidently feels regret and responsible about his relationship with his brother because, they seem distant and he shows that he feels fully responsible when he ends the poem by using the last line to express his feelings about it all: 'I ran on, unable to close the distance I'd set in motion'. Which to my understanding means, he and Paul ran on chasing the bus, and the distance between him and his brother grew, literally and metaphorically, and Forster was never able to decrease this gap and allow their relationship to undergo growth. ?? ?? ?? ?? Henok Gheotom 10L En2 ...read more.