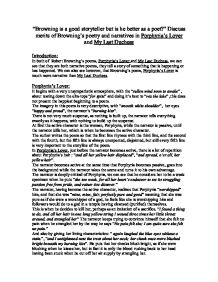 &quot;Browning is a good storyteller but is he better as a poet?&quot; Discuss merits of Browning's poetry and narratives in Porphyria's Lover and My Last Duchess

"Browning is a good storyteller but is he better as a poet?" Discuss merits of Browning's poetry and narratives in Porphyria's Lover and My Last Duchess Introduction: In both of Robert Browning's poems, Porphyria's Lover and My Last Duchess, we can see that they are both narrative poems, they tell a story of something that is happening or has happened. We can also see however, that Browning's poem, Porphyria's Lover is much more narrative than My Last Duchess. Porphyria's Lover: It begins with a very unsympathetic atmosphere, with the "sullen wind soon to awake" , about tearing down the elm-tops "for spite" and doing it's best to "vex the lake" ,this does not present the happiest beginning to a poem. The imagery in this poem is very descriptive, with "smooth white shoulder", her eyes "happy and proud", the narrator's "burning kiss". There is not very much suspense, as nothing is built up, the narrator tells everything exactly as it happens, with nothing to build up the suspense. At first the active character is the woman, Porphyria, while the narrator is passive, until the narrator kills her, which is when he becomes the active character. The author writes the poem so that the first line rhymes with the third line, and the second with the fourth, but the fifth line is always unexpected, disjointed, but still every fifth line is very important to the storyline of the poem. ...read more.

But at the end of the poem the two are unified, the dead and the living, the narrator and his object of obsession, which only a few moment before was the other way round, when Porphyria was obsessed with her lover, the passive narrator. We can see that the narrator shows his combination of his possessing her when eh says : "And thus we sit together now, and all night long we have not stirred, and yet God has not said a word!" Here he is saying that God does not have anything against what the narrator did, that God does to have anything to condone, what the narrator did was right through his eyes. My Last Duchess : Even just looking at the title, My Last Duchess, we can see that the narrator is extremely possessive of her, she does not have a name, perhaps to him her name is not important to the narrator, we can also guess that the Duchess dies not that long ago, as the "last" emphasizes that it was most recent. The imagery is very explicit, there is a lot of description, but not as much as in Porphyria's Lover. When he shows the steward the painting of his ex-wife, he says "looking as if she were alive" , so we can immediately deduce that she is not. He also calls "that piece a wonder, now", which shows us that he did not think it a wonder at all before. ...read more.

The narrator is unbending, he refuses ever to stop. At the end of this poem, the narrator draws the curtains on his last duchess' portrait and says to the servant that they will go down and see the "company below". He has hinted to the man-servant that he does not like disobedience and also that he doesn't like his wives flirting with other men, event thought it would appear that is it just his mind that is making him think that his waves are flirting, and this makes him jealous. The atmosphere is permanently tense, the narrator seems as if at any minute he might snap. The narrator is the main character, he does all the talking, all the actions, the servant is in fact just another spectator. Conclusion: In both of Browning's poems, My Last Duchess and Porphyria's Lover, we have a very clear story of what's going on, the story itself is interesting, and the way that he has turned them into poems is also very good, but I would say that he is better as a storyteller, not as a poet. If I had to choose one poem that I thought was more poetry and less storytelling, in my opinion it would have to be My Last Duchess, in Porphyria's Lover there is too much picture description, which you would get in a story when setting the scene. It is a very good poem, but it would probably be described as more of a story. ...read more.