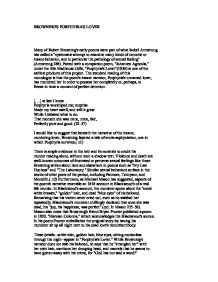 BROWNING'S PORPHYRIA'S LOVER Many of Robert Browning's early poems were part of what Isobel Armstrong has called a "systematic attempt to examine many kinds of neurotic or insane behavior, and in particular the pathology of s****l feeling" (Armstrong 288). Paired with a companion poem, "Johannes Agricola," under the title Madhouse Cells, "Porphyria's Lover"(1836) is one of the earliest products of this project. The standard reading of this monologue is that the poem's insane narrator, Porphyria's unnamed lover, has murdered her in order to possess her completely or, perhaps, to freeze in time a moment of perfect devotion: [. . .] at last I knew Porphyria worshiped me; surprise Made my heart swell, and still it grew While I debated what to do. That moment she was mine, mine, fair, Perfectly pure and good: (32-37) I would like to suggest that beneath the narrative of the insane, murdering lover, Browning layered a tale of erotic asphyxiation, one in which Porphyria survives.( n1) There is ample evidence in the text and its contexts to credit the murder reading alone, without such a shadow text. Violence and death are well-known outcomes of frustrated or perverse s****l feelings like those Browning writes about here and elsewhere in poems such as "My Last Duchess" and "The Laboratory." Similar s****l behaviors surface in the works of other poets of the period, including Patmore, Tennyson, and Meredith.( n2) ...read more.

d'exces (1833), attributed to Alfred de Musset; an anonymous English pamphlet entitled Modern Propensities: Or an Essay on the Art of Strangling (c. 1792), as well as nineteenth-century editions of the London Times and English and Continental medical books.( n3) If such a game were part of Porphyria's s****l initiation into the so-called "little death" of o****m, and if her lover untightened her tresses at the right moment, then Porphyria's eyes would still have been bright, and her cheek would in fact have blushed again, because she wasn't dead.( n4) The fact that Porphyria experienced no pain may be explained by a detail in the Modern Propensities pamphlet's account of how a dubious character named Parson Manacle ministered to a condemned woman who was terrified that hanging would be painful. In this story, which may well be a spoof, the parson first demonstrated erotic asphyxiation himself and then included the prisoner in his s*x play in order to show her that hanging would not hurt. The pamphlet concludes that the poor woman's "ideas of hanging were greatly dissipated, and that she believed a few repetitions [. . .] would entirely remove her terrors" (qtd. in Hazelwood 21). Further support for the erotic asphyxiation reading can be found in the differences between the narrator's vivid description of Porphyria's appearance and those of the lovers in the Blackwood's and Procter accounts. ...read more.