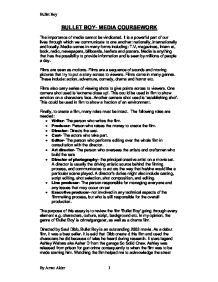 BULLET BOY- MEDIA COURSEWORK The importance of media cannot be vindicated. It is a powerful part of our lives through which we communicate to one another: nationally, internationally and locally. Media comes in many forms including: T.V, magazines, Internet, book, radio, newspapers, billboards, leaflets and posters. Media is anything that has the possibility to provide information and is seen by millions of people a day. Films are seen as motions. Films are a sequence of sounds and moving pictures that try to put a story across to viewers. Films come in many genres. These include: action, adventure, comedy, drama and horror etc. Films also carry series of viewing shots to give points across to viewers. One camera shot used is 'extreme close up'. This could be used in film to show emotion on a characters face. Another camera shot used is 'establishing shot'. This could be used in film to show a fraction of an environment. Finally, to create a film, many roles must be intact. The following roles are needed: * Writer- The person who writes the film. * Producer- Person who raises the money to create the film. * Director- Directs the cast. * Cast- The actors who take part. * Editor- The person who performs editing over the whole film in consultation with the director. ...read more.

Curtis is Ricky's younger brother. He looks up to Ricky, is clever and has a funny sense of humour. Finally, we have Wisdom. He isn't the present meaning of his name. He drags Ricky back into the slums and is immature as well as selfish. These characters have very significant roles as Dibb shows the movie through all of their perspectives. Ashley Walters who plays Ricky gives a stunning performance as a 'piggy in the middle' type person. His script reflects real life and I think has changed his image of a thug to sort of like a youth worker. Luke Fraser who plays Curtis gives a realistic performance of particularly younger brothers, being a slight imitation of their older brothers. If not, having an interest of what they do and how they do it. This appeals to children his age. His professionalism at the age of 13 is amazing. Following on is their mother Beverly, played by Claire Perkins from soap 'Family Affairs'. She acts as the mum, playing a caring, hard-working woman who just wants the utmost for her sons. Disappointed that her son hasn't changed, she does what almost every mother would do and disowns son Ricky to succeed youngest son Curtis. Finally is Leon Black as Wisdom. ...read more.

The song makes me imagine a flashback of the whole film in simple clip views. E.g. dead bodies, prison cell, police raid and Leon hugging Beverly etc. Also, for example, the slowness of the lyrics make the appearance seem scary, viewer tired and emotional. We also hear rap music by the group 'N.E.R.D.' when Ricky visits the new enemy of which I can only describe as the owner of the damaged car: black with long hair and a gangster. Once inside his house, we here loud rap music and see him bopping to it. The soundtracks used have rhythm for specific purposes. In conclusion to this essay, I think this film is important of getting a message across to teenagers as well as the younger age range. Education doesn't start at the first year of secondary school. The reality of the film enlightens me the most, looking in comparison at my hometown. The interrogation and labelling of black youths is clear, which I can say for myself is true. The black community must work as a team and destroy the names and opinions of others. The main creation of gangs I think is peer pressure. Can you live up to your family, friend and area reputation? Guns aren't a joke. Knives aren't a joke. But death is real. Be your own person. We need leaders. They could be you? ?? ?? ?? ?? Bullet Boy I By Arran Alder ...read more.