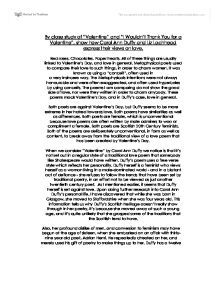 By close study of Valentine and I Wouldnt Thank You for a Valentine, show how Carol Ann Duffy and Liz Lochhead express their views on love.

By close study of "Valentine" and "I Wouldn't Thank You for a Valentine", show how Carol Ann Duffy and Liz Lochhead express their views on love. Red roses. Chocolates. Paper hearts. All of these things are usually linked to Valentine's Day, and love in general. Metaphysical poets used to compare their love to such things, in order to charm women. It was known as using a "conceit", often used in a very insincere way. The Metaphysicals intentions were not always honourable and were often exaggerated, and often used hyperboles by using conceits. The poems I am comparing do not show the good side of love, nor were they written in order to charm anybody. These poems mock Valentine's Day, and in Duffy's case, love in general. Both poets are against Valentine's Day, but Duffy seems to be more extreme in her hatred towards love. Both poems have similarities as well as differences. Both poets are female, which is unconventional because love poems are often written by male admirers to woo or compliment a female. Both poets are Scottish 20th Century feminists. Both of the poems are deliberately unconventional, in form as well as content, to break away from the traditional view of a love poem that has been created by Valentine's Day. When we consider "Valentine" by Carol Ann Duffy we notice is that it's not set out in a regular style of a traditional love poem that somebody like Shakespeare would have written. Duffy's poem uses a free verse style which reflects her personality. Duffy herself is a feminist who views herself as a woman living in a male-dominated world - and in a blatant act of defiance - she refuses to follow the trends that have been set by traditional poetry, in an effort not to be viewed as just another twentieth century poet. As I mentioned earlier, it seems that Duffy herself is set against love. ...read more.

Duffy uses words like "faithful" and "for as long as we are" to refer to the length of time their relationship will last. "Fierce kiss" is used as an oxymoron, and "fierce" is a word you wouldn't usually associate with love poems. "Will stay on your lips" is a very good line because it symbolizes that when a relationship ends, bitter feelings remain. The comparison with an onion works well. After eating an onion, the taste remains in your mouth. And a kiss can remain in a person's mind forever. The final stanza goes "Take it. Its platinum loops shrink to a wedding ring, if you like. Lethal. Its scent will cling to your fingers, cling to your knife." Duffy is now demanding that her partner take the gift, "Take it". She then compares the onion to a wedding ring, as the loops shrink to the size of the wedding ring, although she quickly adds, "if you like". It also suggests that marriage constricts you, as a finger would probably not fit into one of the tiny onion loops. Finally, it's unconventional because usually it's the man asking the woman to get married, not the other way round and especially in such a peculiar manner. The gentle picture of peeling the onion layers away has been distorted into a much more brutal image of cutting the onion up with a knife. Sometimes people never truly recover from a failed relationship or marriage and they'll continue to feel heartache and bitterness. That's why it's so effective when Duffy says, "Its scent will cling to your fingers, cling to your knife". When we look at "I Wouldn't Thank You For A Valentine" by Liz Lochhead, we see some similarities and differences. Liz Lochhead was also born in Scotland in 1947. She is a well-known Scottish poet, dramatist and performance artist. She began as a teacher in fine art, but became a full time writer in the 70's. ...read more.

Lochhead, as a feminist, gets to the point and refuses outright to wear it ever, and would rather have something thermal, which isn't attractive at all. Lochhead ends the stanza by saying, "If you hired a plane and blazed our love in a banner across the skies; if you bought me something flimsy in a flatteringly wrong size; if you sent me a postcard with three X's and told me how you felt...I wouldn't thank you, I'd melt". Lochhead talks about "blazing our love in a banner across the skies" which is something you would see in a Hollywood blockbuster, not something that would usually happen in real life. Lochhead uses alliteration when she says "something flimsy in a flatteringly wrong size" and criticizes her partner for purposely buying something too small, in a pitiful attempt to buy her affections and love. At the very climax, Lochhead says "I wouldn't thank you" which is a refrain from the end of the previous three stanzas but instead of saying "for a Valentine" she says, "I'd melt". What the reader has to understand is that Lochhead is not saying she melt with love, she's saying she'd melt with embarrassment. When it comes to love, I feel that neither poet is right. Duffy has clearly been hurt in the past and is either given up on love totally, or is living in fear of rejection. I support Lochhead when she says that Valentine's Day is a commercial attempt to dig deeper in our wallets, but I doubt that if somebody gave me a gift for Valentine's Day, that I would send it back in their faces. Love is a difficult subject, especially for me to criticize, when it doesn't carry any of the heavier responsibilities for me yet, like marriage, children or finance. However, I feel that love should be embraced, and not criticized. Both poems put down the image of love that the modern public perceives. But in my mind at least, I can just say that if it makes them happy, then I have absolutely nothing against it. ...read more.