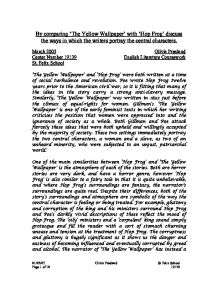 By comparing 'The Yellow Wallpaper' with 'Hop Frog' discuss the ways in which the writers portray the central characters. March 2003 Olivia Presland Center Number 19139 English Literature Coursework St. Felix School 'The Yellow Wallpaper' and 'Hop Frog' were both written at a time of social turbulence and revolution. Poe wrote Hop Frog twelve years prior to the American civil war, so it is fitting that many of the ideas in the story carry a strong anti-slavery message. Similarly, 'The Yellow Wallpaper' was written in 1892 just before the climax of equal-rights for women. Gillman's 'The Yellow Wallpaper' is one of the early feminist texts in which her writing criticises the position that women were oppressed into and the ignorance of society as a whole. Both Gillman and Poe attack fiercely these ideas that were both upheld and willingly accepted by the majority of society. These two settings immediately portray the two central characters, a woman and a slave, as two of an unheard minority, who were subjected to an unjust, patriarchal world. One of the main similarities between 'Hop Frog' and 'The Yellow Wallpaper' is the atmosphere of each of the stories. Both are horror stories are very dark, and have a horror genre, however 'Hop Frog' is also similar to a fairy tale in that it is quite unbelievable, and where Hop Frog's surroundings are fantasy, the narrator's surroundings are quite real. Despite their differences, both of the story's surroundings and atmosphere are symbolic of the way the central character is feeling or being treated. For example, gluttony and corruption of the king and his ministers surround Hop Frog and Poe's darkly vivid descriptions of these reflect the mood of Hop-Frog. The 'oily' ministers and a 'corpulent' king sound simply grotesque and fill the reader with a sort of stomach churning unease and tension at the treatment of Hop Frog. The corruptness and gluttony is hugely significant as it shows us the danger and easiness of becoming influenced and eventually corrupted by greed and alcohol. ...read more.

In both stories the position of women is severely criticized. In 'Hop Frog', Trippetta's position as both a slave and a woman is exploited. Her 'grace' and 'exquisite beauty' is described as being 'universally admired'. Poe describes how she was 'admired' and 'petted' suggesting the shocking abuse she is subject to. Poe describes how the king 'threw the entire contents of the goblet in her face', suggesting the complete humiliation that she suffered. In 'The Yellow Wallpaper', we are introduced to Jennie who is the sister of John. She is described as a 'perfect' and 'enthusiastic housekeeper'. Typically of a nineteenth century Lady, Jennie is subservient accepting her position willingly and gratefully. Gillman describes how she 'hopes for no better profession'. Jennie represents the women of society who have grown to accept and are either to weak or to scared to rebel against a life that is no better than that of a slave's. The narrator's position as a woman is very similar to Hop Frogs. She is treated as a possession by her husband John and is seen to have no real opinions or views. She describes how the 'heads' that she sees are 'strangle[d]' by the wallpaper, 'turns them up side down' and 'turns their eyes white'. This is very much inactive of the way both she and the other women of society feel suffocated and oppressed by their position. Both stories are written in first person narrative, which makes them a lot more personal. 'Hop Frog' is told by an anonymous Narrator, an onlooker, whilst 'The Yellow Wallpaper' is written like a diary with the narrator, a woman suffering from post-natal depression being the central character. Semi-Autobiographical, the story is loosely based on Perkins own experiences. The narrator in 'The Yellow Wallpaper' remains nameless meaning that the narrator could be any woman in society. It is also a metaphor for the identity that has been lost through her illness and the ignorance of her husband, John. ...read more.

form mocking Hop Frog to being mocked themselves Hop Frog then suspends them from the ceiling at the ball and burns them alive. The fact that throughout the story Hop Frog never had the presence that the evil King had means that we would not immediately suspect Hop frog. When the 'grating' noise was first introduced, the reader did not think that it could be Hop Frog. However at the end when Hop Frog is perched on the rope with the burning king and ministers below him the 'grating noise' came form the 'fang like teeth of the dwarf', 'who ground and gnashed them as he foamed at the mouth'. This is an insane a picture as that of the narrator. Hop frog rising up against the king is a complete reversal of roles, the oppressed has become the oppressor. However how is it possible that Poe can get away with this ending without his central character looking like the vengeful murder that he has become? It is perhaps because all-thorough the story, the treatment of Hop Frog as well as his situation has been described as Horrendous, horrific and brutal, evoking incredible sympathy in the reader. As if this isn't reason enough, Poe threw in the added ploy of alcohol, which appears to demonize Hop Frog. Therefor when Hop Frog commits this terrible act, he is immediately forgiven whilst we all revel in the torture that the king and his ministers now incur. In the eyes of the reader justice has been done. Perhaps through his ending, Poe is forecasting what is to come, when the black slaves will rise up against their own white oppressors. It is therefor interesting that n order to truly punish and humiliate them, Hop Frog turns them first black. Like Gillman, Poe does not want to demonize the female character, leaving the question of Trippetta's involvement up to the reader to answer. ?? ?? ?? ?? 01/05/07 Olivia Presland St Felix School Page 6 of 5 19139 ...read more.