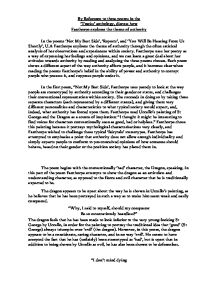 By Reference to three poems in the 'Tracks' anthology, discuss how Fanthorpe explores the theme of authority.

By Reference to three poems in the 'Tracks' anthology, discuss how Fanthorpe explores the theme of authority In the poems 'Not My Best Side', 'Reports', and 'You Will Be Hearing From Us Shortly', U.A Fanthorpe explores the theme of authority through the often satirical analysis of her observations and experiences within society. Fanthorpe uses her poetry as a way of expressing her feelings and opinions, and we can learn a great deal about her attitudes towards authority by reading and analysing the three poems chosen. Each poem shows a different aspect of the way authority affects people, and it becomes clear when reading the poems Fanthorpe's belief in the ability of power and authority to corrupt people who possess it, and suppress people under it. In the first poem, "Not My Best Side', Fanthorpe uses parody to look at the way people are stereotyped by authority according to their gender or status, and challenges their conventional representation within society. She succeeds in doing so by taking three separate characters (each represented by a different stanza), and giving them very different personalities and characteristics to what typical society would expect, and, indeed, what authority has forced upon them. Fanthorpe used Uccello's painting of St George and the Dragon as a source of inspiration: "I thought it might be interesting to find voices for characters conventionally seen as good, bad or helpless." Fanthorpe chose this painting because it portrays mythological characterisations very clearly, and Fanthorpe wished to challenge these typical 'fairytale' stereotypes. Fanthorpe has attempted to emphasise a point that authority does not allow enough individuality and simply expects people to conform to pre-conceived opinions of how someone should behave, based on their gender or the position society has placed them in. The poem begins with the conventionally 'bad' character, the Dragon, speaking. In this part of the poem Fanthorpe attempts to show the dragon as an articulate and understanding character, as opposed to the fierce and evil character that he is traditionally expected to be. ...read more.

I believe Fanthorpe has done this to show that the candidate is voiceless when in an interview, and to display the pointlessness of interviews, when the outcome has been decided before the interview even takes place. The only way we have of knowing the answer to the interviewer's questions are by making an educated guess from the response of the panel, which, in most cases, is a single, unenthusiastic phrase such as "Ah" or "indeed" It is clear that the interviewers have no interest in the person's justifications for why they are suitable for the job; they simply make impertinent comments on the information displayed on their application form. "Let us consider your application form" This quote from the poem shows the disinterest in the actual person, and more interest on their class, gender, and other factors displayed on their application form. The panel spend little time discussing the candidate's "impressive" qualifications, and almost immediately moves on to focus on the negative aspect of them, and their possible use within the job for which the applicant is applying. The candidate is asked to justify the use of their qualifications very early in the interview. "Would you care to defend their [the applicant's qualifications] relevance?" This would succeed in belittling the applicant, particularly when the interviewer's response to their well though out answer is a sceptical "indeed" After the polite, (if inhospitable) beginning to the job interview, the meeting soon descends into a personal battering of the applicant's self esteem by the authoritative figure of the interviewer. The first matter the interviewing panel broaches is the age of the applicant. "Perhaps you feel able to make a comment about that, Too? We are conscious ourselves Of the need for a candidate with precisely The right degree of immaturity" These comments, although 'sugar-coated' by the authoritative figure, succeed in alienating the candidate, and forcing them into assent. ...read more.

"Remember your high calling: School is the world." Fanthorpe uses irony to indicate that the way we live our lives is similar to our school reports. "Born at Sound beginning We move from satisfactory To fair, then Find The subject difficult, Learning at last we Could have done better." In this final part of the stanza, I feel that Fanthorpe is attempting to make a statement that during life, you endeavour to be the best you can be, but ultimately realise that the decisions you have made may not have been the right ones. Moreover, she may be trying to make the point that one is pushed into inconspicuousness by authority, which causes one to feel disappointed, and insignificant. In the poem, we have no way of knowing whether Fanthorpe is referring to herself, or people in general, but the slightly bitter tone in the final three lines, and, indeed, the final stanza, is evident. "Stone only, final instructor, Modulates from the indicative With rest in peace." By this, Fanthorpe means that the only time that we avoid the 'report' system of life is when we die, and our epitaph is inscribed onto our grave. To conclude, the poem 'Reports' is illustrating the way that teachers depersonalise pupils, in order to prevent problems for them. The pupils are seen as one whole state, and the fact that the education system does not allow individuality leads to a sense of disappointment later on in life. This shows that individuals are repressed by society, and do not feel able to follow their own paths, as they are constantly being grouped with others. Quintessentially, the poems 'Not My Best Side', 'You Will Be Hearing From Us Shortly', and 'Reports' all emphasise that UA Fanthorpe believes that power corrupts, and that people of authority usually use it to their advantage, to belittle others or to make them feel sub-standard. It is also clear that Fanthorpe believes that authority within society leads to depersonalisation of a character, and the stifling of individuals into conformity. ...read more.