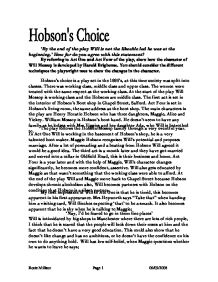 By the end of the play Will is not the likeable lad he was at the beginning.' How far do you agree with this statement?

'By the end of the play Will is not the likeable lad he was at the beginning.' How far do you agree with this statement? By referring to Act One and Act Four of the play, show how the character of Will Mossop is developed by Harold Brighouse. You should consider the different techniques the playwright uses to show the changes in the character. Hobson's choice is a play set in the 1880's, at this time society was split into classes. There was working class, middle class and upper class. The women were treated with the same respect as the working class. At the start of the play Will Mossop is working class and the Hobsons are middle class. The first act is set in the interior of Hobson's Boot shop in Chapel Street, Salford. Act Four is set in Hobson's living room, the same address as the boot shop. The main characters in the play are Henry Horatio Hobson who has three daughters, Maggie, Alice and Vickey. William Mossop is Hobson's boot hand. He doesn't seem to have any family as he lodges with Mrs Figgins and her daughter Ada, who Will is betrothed to. The play follows the Hobson/Mossop family through a very eventful year. In Act One Will is working in the basement of Hobson's shop, he is a very talented boot maker. Maggie Hobson recognises Will's potential and proposes marriage. After a lot of persuading and a beating from Hobson Will agreed it would be a good idea. ...read more.

At the end of the act Will's character changes, He is no longer shy and always holding his tongue. Hobson had been told about the marriage between Maggie and Will and Hobson believes that Will is to blame. Will doesn't think it's fair that he is being blamed for something that is not his fault; "I'm none wanting thy Maggie, it' her that's after me, but I'll tell you this, Mr Hobson: If you touch me with that belt, I'll take her quick, aye, and stick to her like glue." Will feels that it is wrong for Hobson to be beating him, Will has a good sense of right and wrong. I think that he also feels that he hasn't encouraged it to happen, Maggie initiated the idea so why should he get punished? This is a good example of when Will is being unpredictable, he can stand up for himself despite what people think. He knows his place in society and doesn't want to cause any problems by stepping out of place, he is a 'yes sir, no sir' kind of guy. In Act Four Will has become ambitious, educated and assertive. The most obvious change in his character is his growth in confidence, Will appears a lot more confident and doesn't need to be threatened with violence to stand up for himself. This is shown in the stage directions when Maggie and Will enter Hobson's living room; 'Will enters. ...read more.

This is subtly showing that Will is socially below the Hobsons' as well as physically. Will appears to be more comfortable down in the cellar, when he is up in the shop he is desperate to be get back; "I'll be getting back to my stool, Miss Maggie. (Moves to trap)" In the fourth act when he returns to the shop Will is positioned up a ladder looking at stock this shows that now he is actually above the Hobsons' socially because his shop has got most of Hobson's trade, he has a better business and prospects. In conclusion I am in slight agreement with the opening statement, Willie is still the likeable lad he was at the beginning underneath the harsh man he seems to be now in front of everyone except Maggie. I don't think that Will's character has changed deep down because all along he has just done what people have told him to do. At the beginning he was told he was going to marry Ada and that he was working class and there was nothing he could do about it. Then Maggie told him he is not going to marry Ada, Will is to marry her and he is going to have a successful business. Will is very good at doing what people tell him to, Maggie told him to be confident when speaking to Hobson, so he was. William Mossop has been consistent all the way through the play, doing what he is told. Rosie Millson Page 1 06/03/2008 ...read more.