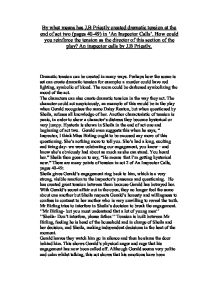 By what means has J.B Priestly created dramatic tension at the end of act two (pages 40-49) in 'An Inspector Calls'. How could you reinforce the tension as the director of this section of the play? An inspector calls by J.B Priestly.

By what means has J.B Priestly created dramatic tension at the end of act two (pages 40-49) in 'An Inspector Calls'. How could you reinforce the tension as the director of this section of the play? An inspector calls by J.B Priestly. Dramatic tension can be created in many ways. Perhaps how the scene is set can create dramatic tension for example: a murder could have red lighting, symbolic of blood. The room could be darkened symbolizing the mood of the act. The characters can also create dramatic tension in the way they act. The character could act suspiciously, an example of this would be in the play when Gerald recognises the name Daisy Renton, but when questioned by Sheila, refuses all knowledge of her. Another characteristic of tension is panic, in order to show a character's distress they become hysterical or very jumpy. Hysteria is shown in Sheila in the end of act one and beginning of act two. Gerald even suggests this when he says, " Inspector, I think Miss Birling ought to be excused any more of this questioning. She's nothing more to tell you. She's had a long, exciting and tiring day- we were celebrating our engagement, you know- and know she's obviously had about as much as she can stand. You heard her." Sheila then goes on to say, "He means that I'm getting hysterical now." There are many points of tension in act 2 of An Inspector Calls, pages 40-49: Sheila gives Gerald's engagement ring back to him, which is a very strong, visible reaction to the inspector's presence and questioning. He has created great tension between them because Gerald has betrayed her. With Gerald's secret affair out in the open, they no longer feel the same about one another but Sheila respects Gerald's honesty and willingness to confess in contrast to her mother who is very unwilling to reveal the truth. ...read more.

The inspector asks why the girl had not wished to take any more money from him and Mrs. Birling claims that Eva told her a lot of nonsense and that she didn't believe a word of it. The audience sees that this comment does not impress the inspector so she goes on to say that Eva had some fancy reason, but she did not believe a girl of "that sort would ever refuse money!" Yet again the inspector is not impressed with Mrs. Birling's answer and he wont give up. She goes on to say that Eva had told her that the father of her child had stolen the money. Eva had come for help as she did not want to take any more stolen money and didn't wish for the father to get in any more trouble. Mrs. Birling claims that it sounded ridiculous and the girl had told so many lies already this could have just been one more. Once again, Mrs Birling claims her belief that she was justified in her decision to persuade the committee not to allow her to claim for assistance. The inspector questions her as to who is to blame and she says that firstly the girl is to blame and secondly the father of her child. If he did not belong to her class and was a drunken idler, then that should be more reason for him to be made an example of this is dramatic irony the audience by now will realise that she is talking in these terms about her son Eric. She then goes on to say that the father should be, "dealt with very severely." Sheila then enters the conversation with much alarm, pleading with her mother to stop, but her mother silences her and once again she is labelled as hysterical. Mrs. Birling continues her rant of accusation, advising the inspector of the young man's punishment. ...read more.

Each character believes they know nothing of the girl, however the inspector is constantly revealing new information that makes one of the characters realise that they know Eva Smith. The stage setting could do a great deal for displaying tension. In the play there is a large table to which all the characters are sitting around. The two ladies decide to go to the drawing room and expect the man to arrive shortly after them. When the inspector arrives he is shown into the dining room. Soon after it is advised that Eric leave and go to bed as he is in a drunken state. Sheila then enters to room inquisitively as she wanted to know why the men had not joined them in the dining room she takes a seat in the dining room and Mr Birling leaves in order to explain what is happening to his wide. Mr Birling at this point is in a state of anger as the inspector has been winding him up. Mr and Mrs Birling enter the dining room soon after and they all take a seat. Mr Birling is the first to be questioned, the inspector reveals a photograph of the girl and Mr Birling recognised it. The inspector watches every single move of Mr Birling. This shows great tension as the inspector knows Mr Birling knows Eva as she was an employee of his, he fired her for staging a protest for more money, and him denying not knowing her could lead to the inspector becoming more suspicious. Sheila is the next to be questioned she got the girl fired from a job at Milwards. Sheila becomes very hysterical. Gerald is next to be questioned, (this is the first part of act 2) This is a major part of tension between the young couple. Sheila as yet has had the biggest impact on this girl's life. It is suggested by Gerald that she should leave as his questioning will only upset her, but she wishes to stay. She wishes to know what involvement Gerald has had in this young girls life. ...read more.