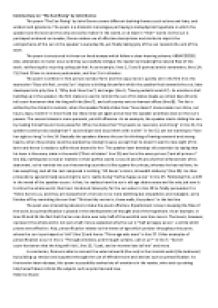 ﻿Commentary on ?The Sun Rising? by John Donne The poem ?The Sun Rising? by John Donne covers different clashing themes such as love and hate, and wisdom and ignorance. The poem is a dramatic monologue portraying a metaphysical hyperbole in which the speaker and his lover are the only ones who matter in the world, or at least in ?their? world. As the sun is portrayed as almost an invader, Donne makes use of effective descriptions and similes to depict the unimportance of the sun in the speaker?s everyday life, yet finally taking pity of the sun towards the end of the work. The poem is structured in three ten lined stanzas which follow a clear rhyming scheme: ABBACDCDEE. Also, alterations in meter occur and they successfully intrigue the reader by breaking the natural flow of the work, reinforcing his recurring colloquial feel. As an example, lines 1, 5 and 6 portray iambic tetrameter; lines 3,4, 7,8,9 and 10 are in common pentameter, and line 2 is in dimeter. ...read more.

As an example, the speaker starts chiding the sun by making himself sound more powerful. When he states that ?thy beams so reverend, and strong? in line 11, the speaker continues by saying that ?I could eclipse and cloud them with a wink? in line 13, yet not wanting to ?lose her sight so long? in line 14. Basically the speakers blames the sun for thinking of having reverend and strong beams, when they simply could be avoided by closing his eyes, except that he doesn?t want to lose sight of his lover and hence is ready to suffer those beams for her. The speaker later develops this assertion by saying that his lover is like every state in the world (?She?s all states? line 21) and he is like every prince (?and all princes I? line 21); nothing else is real or matters in their perfect world. Lines 23 and 24 are a further enforcement of his statement, as he reminds the sun that owning countries is like ...read more.

As an example, in lines 25 and 26 the fact that the Sun can shine over only half of the world at one time recurs. The lovers, however, represent the whole world, not just a half, hence explained why the sun is ?half as happy as we?, a simile which proves very effective. Also, personification relates to the theme of age which persists throughout the poem, where the sun is portrayed as ?old? (line 1) and hence ?Thine age asks ease? in line 27. Other examples of personification occur in line 3, ?Through windows, and through curtains, call on us?? in line 7, ?Go tell court-huntsmen that the king will ride?; line 16, ?Look, and to-morrow late tell me? and more. In conclusion, Donne is able to connect the external world (the sun) to the internal world (the bedroom) by building up tension and suspense through the use of effective tone and devices such as personification. As the tension later releases, this poem successfully evokes lots of emotions in the reader, who ends up asking him/herself about critical life subjects such as priorities and love. Federico Giusto ...read more.