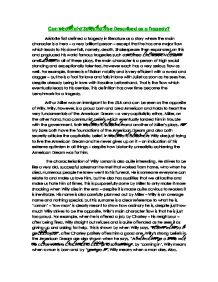 Can 'Death of a Salesman' be Described as a Tragedy?

Can Death of a Salesman be Described as a Tragedy? Aristotle first defined a tragedy in literature as a story where the main character is a hero - a very brilliant person - except that he has one major flaw which leads to his downfall, namely, death. Shakespeare then expanded on this and produced his world famous tragedies such as Romeo and Juliet, Macbeth and Hamlet. In all of these plays, the main character is a person of high social standing and exceptionally talented, however each has a very serious flaw as well. For example, Romeo is of Italian nobility and is very efficient with a sword and dagger - but he is a fool for love and falls in love with Juliet as soon as he sees her, despite already being in love with Rosaline beforehand. That is the flaw which eventually leads to his demise. This definition has over time become the benchmark for a tragedy. Arthur Miller was an immigrant to the USA and can be seen as the opposite of w***y. w***y, however, is a proud born and bred American and holds to heart the very fundamentals of the American Dream - a very capitalistic ethos. Miller, on the other hand, had communist beliefs which eventually landed him in trouble with the government. Both Death of a Salesman and another of Miller's plays, All My Sons both have the foundations of the American Dream and also both secretly criticize the capitalistic belief. ...read more.

In contrast, you could argue that it is not a tragedy as all other characters from Shakespeare's tragedies were people of high standing - whereas w***y is not. Additionally, w***y is not at all a hero by any definition - in fact he is in some ways a bad person as will be shown. Finally, Shakespeare's heroes have quite dramatic flaws, whereas w***y has the same flaws as every ordinary human being. These are quite convincing arguments to why it isn't a tragedy. We will be looking at each argument more in-depth. The play follows the tragedies of Shakespeare in that the main character dies in the end. w***y commits suicide by crashing his car so that his family would get the life insurance money of $20,000 and make life easier for them. This is of course a noble reason to kill oneself as it is very selfless. However, it would make w***y a hypocrite as killing himself is also him giving up - something he condemned. Nevertheless, his intentions were admirable and this could make him seen as a hero since he willingly died for a selfless cause. Likewise, w***y has flaws just like Macbeth, Hamlet and Romeo. These flaws eventually cause his downfall and ultimately, death. For example, his unrealistic view on things and his pride drove Biff away and he was left without a job despite being offered one due to his pride. ...read more.

The point of a hero is to be extraordinary, to stand out from the common man. w***y is as ordinary as you can get. In both who and what he is. In conclusion, we have seen the argument presented from both sides and it is clear that both sides present a convincing case, making this not a simple decision. It is clear that the answer to the question lies in whether w***y can be seen as a 'hero', that is for individuals to make their minds up on by weighing both arguments thoroughly and then making a choice. From my view point, I do not see any argument which is stronger. Of course, if we are judging by the literary standards set by Aristotle and Shakespeare, then no, it is not a tragedy as the case against w***y being a hero is stronger. From this, we can finish off by saying that Death of a Salesman is not a tragedy as it is missing a key ingredient - a hero - in this case; w***y, who does not measure up to the requirements of a literary hero. However, you can only make this conclusion if you judge by the standards and definitions set by Shakespeare and Aristotle. To modern people and even late 1940s Americans right after WWII, Death of a Salesman can be seen as a modern tragedy of the ordinary person as it is a very tragic thing to see happen to any man and his family. So - is Death of a Salesman a tragedy? Depending on how you define it: yes and no. ...read more.

This essay engages superbly with the question. There is a sustained focus on the question, which means the argument is convincing. It was nice to see there was still a good level of analysis, as a question like this can ...

This essay engages superbly with the question. There is a sustained focus on the question, which means the argument is convincing. It was nice to see there was still a good level of analysis, as a question like this can often confuse candidates into simply asserting and commenting. Analysis needs to be the foundation of any essay, and this essay manages this well. I have one problem with this essay, and that is the way it poses both sides of the argument in a balanced way. In English Literature, it's not good enough to say "both sides present a convincing case". If I were answering this question, I would've picked a definition of tragedy which clearly shows Willy is a tragic hero and stick to the argument. To strengthen the essay, I would've added that other interpretations can be read, but they aren't as strong and explain why. This would've meant the essay was more succinct and concise.

The analysis here is good. I really liked the definitions of tragedy, as this allows a cogent argument. I would note that Arthur Miller wrote an essay on the tragedy of a common man, and it seems foolish not to cite this in an essay regarding his play! Language and structure are coherently analysed. I liked how music was discussed, and I would've taken this further to look at Miller's use of mobile concurrencies of past and present. It's nice to see analysis beyond imagery and language, as structure is another key part to the tragedy. I would've liked to have seen a bit more focus on the audience response, allowing an exploration of why Miller chooses to have Willy become a tragic hero. Such discussion would show a deep understanding of why techniques are chosen, allowing the top marks to be awarded. Context is weaved in well, and it is very sophisticated how this essay links in tragedy with Shakespeare's texts and others.

The structure here is impressive. There is a clear introduction which poses a strong argument, and the conclusion comes to a justified judgement. I do feel that the fact they've gone for a balanced argument makes the conclusion weaker. Instead of saying it depends on how you define it, argue that it is a tragedy based on the definition you introduce. The style here is superb and allows for a convincing argument. This essay has excellent craft, and spelling, punctation and grammar are faultless.