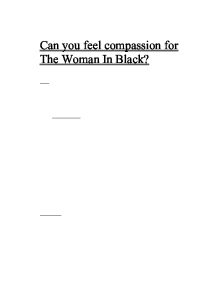 Can you feel compassion for The Woman In Black?

Can you feel compassion for The Woman In Black? Throughout the book the woman in black is portrayed with an image of evilness. All of the terrible things she did, all the children that died and all of the coincidental things that happened when she was around. Mr Kipps was tormented I think from the very beginning of his adventure, at Mrs Drablow's funeral. In the sixth chapter ' THE SOUND OF A PONY AND TRAP ' Mr Kipps hears the sound of a screaming child drowned in the marsh with a pony and trap. While he was fully aware what was going in he was helpless against the woman in black's evil powers. Also in the chapter ' in the nursery ' Kipps once again is confused when the nursery looks almost as if it had just been used as all of the toys and clothes were set out. ...read more.

But in the end, the pain of being parted from him, instead of easing, grew worse and she returned to Crythin. She was not welcome at her parent's house and the man - the child's father - had gone away for good. But Jennet was so distressed that she threatened violence, and in the end the sister relented - just so far. He became more and more attached to the woman who was, when all was said and done, his own mother, more and more fond, an as he did so, he became colder towards Alice Drablow. Jennet planed to take him away, that much I do know. Before she could do so the accident happened, just as you heard. The boy... the nursemaid, the pony and trap and its driver Keckwick." ...read more.

When they had gone Mr Kipps saw the woman in black, and I think it was then he started to panic as he remembered what had happened with the other pony and trap near El Marsh House. Then he was relived to see the two coming back round the corner. But the woman in black stopped the horse from reaching him, it went off track, crashed, the baby was killed and Stella was badly injured. Ten months later Stella too died of her injuries. Just as things were going great, everything went wrong. Jennet had got her revenge; she had ruined Mr Kipps's life just as her life was ruined. In conclusion I think that I could feel compassion for Jennet, I can see that she had to go through a lot of pain, but what I cant see is why she had to take her agony out on so many innocent people like Mr Kipps and his family. ...read more.