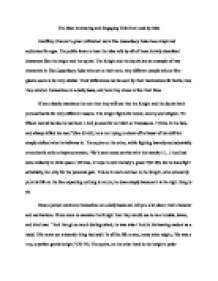 Canterbury Tales: The Knight and The Squire. Their differences can be seen by their motivations for battle, how they conduct themselves on a daily basis, and how they chose to live their lives.

The Most Interesting and Engaging Title Ever used by Man Geoffrey Chaucer's great unfinished work The Canterbury Tales has enraptured audiences for ages. The public loves to hear the tales told by all of these intricly described characters like the knight and the squire. The Knight and the Squire are an example of two characters in The Canterbury Tales who are at their core, very different people who at first glance seem to be very similar. Their differences can be seen by their motivations for battle, how they conduct themselves on a daily basis, and how they chose to live their lives. If one closely examines the text then they will see that the Knight and the Squire both pursued battle for very different reasons. The knight fights for honor, county and religion, "In fifteen mortal battles he had been / And jousted for our faith at Tramissene / Thrice in the lists, and always killed his man."(line 63-65), he is not trying to show off or boast of his skill but simply defend what he believes in. ...read more.

/ He never yet a boorish thing had said / In all his life to any, come what might; / He was a true, a perfect gentle-knight."(70-74). The squire, on the other hand is the knight's polar opposite, "He was embroidered like a meadow bright / And full of freshest flowers, red and white. / Singing he was, or fluting all the day; / He was as fresh as is the month of May."(91-94) This passage shows how the squire is all about the frill and the fluff and not about any real sort of substance. This is fundamentally different from the knight who is all about modesty and chivalry; he doesn't waste his time chasing after dames, but rather does something meaningful and important with his life. So despite them being father and son, "He [the knight] had his son with him, a fine young Squire," (81) ...read more.

and Chaucer says that "He loved so hotly that till dawn grew pale / He slept as little as a nightingale."(99-100), the squire has chosen a life of lust and personal pleasure, seeking only his satisfaction. While this may be somewhat selfish he does have a pleasant and enjoyable life. While the knight must enjoy what he is doing it seems that the constant fighting would be very tedious and depressing. So it is quite obvious that the knight and the squire are fundamentally different characters as can be seen by looking at their motivations for battle, their day to day lives, and how they have decided to live their lives. If forced to pick one of the two I would have to say that the Knight was correct for moral reasons, but in the grand scheme of things the squire really had a good peaceful life going for himself that I would pick over fighting and nobility any day. The Canterbury Tales. Geoffrey Chaucer. Trans. Nevill Coghill. The British Tradition. Boston: Prentice Hall, 2007. 98-119. Print. ?? ?? ?? ?? ...read more.