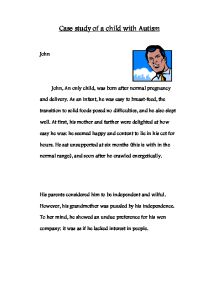 Case study of a child with Autism.

Case study of a child with Autism John John, An only child, was born after normal pregnancy and delivery. As an infant, he was easy to breast-feed, the transition to solid foods posed no difficulties, and he also slept well. At first, his mother and farther were delighted at how easy he was: he seemed happy and content to lie in his cot for hours. He sat unsupported at six months (this is with in the normal range), and soon after he crawled energetically. His parents considered him to be independent and wilful. However, his grandmother was puzzled by his independence. To her mind, he showed an undue preference for his won company: it was as if he lacked interest in people. John walked on his first birthday, much to the delight of his parents; yet during his second year he did not progress as well as expected. Although he made sounds, he did not use words indeed, his ability to communicate was so limited that even when he was three years old his mother still found her self trying to guess what he wanted. Often she tried giving him a drink or some food in the hope that she had guessed his needs correctly. Occasionally he would grab hold of her wrist and drag her to the sink, yet he never said anything like drink, or he would just point to the tap. ...read more.

For instance, he would say ' you really tickle me' in a tone of voice similar to that of a family friend who had used the same expression a day ago. However, his use of this phrase, and most of his speech, was usually inappropriate to the setting, and it lacked any clear meaning. The years from four to six were very difficult for the family. Despite speech therapy and special hep at school, john only made slow progress. He developed a fascination with vacuum cleaners and lampposts and started to draw them over and over again. He became exceptionally excited whenever his mother took the vacuum out, jumping up and down and vigorously waving his arms and flicking his fingers near to his eyes (this is also known as flapping. He also became preoccupied by lights, rushing around the house switching them off and on. Even family outings became ion ordeal, John threw wild tantrums unless the family took exactly the same route and let him count the lampposts. He never seemed to tire of doing the same thing over and over again. His behaviour was also unusual in other ways in that he never really seemed to look at any one directly. Rather, he would look at them only fleetingly or not at all. ...read more.

employers feel unable to give him any more responsibly because he is unable to master social skills required for dealing with colleagues and costumers. He has some awareness of these problems and talks about how difficult he finds it understanding people, ' I never know what to do next' he says. Despite this he had expectations of the future the wants to marry and have a family, but seems to have no firm grasp of what this might entail. (S, Baron, 1995) John Shows the characteristic problems of autism he failed to develop normal social relationships and communication in the first three years of life, he showed unusual interests and repetitive behaviours. John is typically of one group of children with autism he is outgoing socially, he can approach children but his attempts are repetitive and stilled. Johns communication problems are rather subtle and consists of speaking in a one sided repetitive way. John shows classic ritualistic behaviour, doing the same activity over and over again in an identical fashion, he will insist on taking exactly the same route to school very day. John likes nothing more than counting lampposts, he will spend hours a day immersed in nothing else. This will cause problems as a child he would scream if apiece was missing from a jigsaw now he admits he finds change difficult to deal with. ...read more.