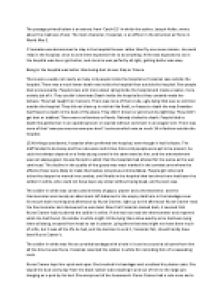 ?Now you get right into bed and stop making jokes.? ?I?m not making jokes. Anybody might be in there.? ?What are you talking about?? Nurse Cramer pleaded with him in a quavering voice. ?Maybe that?s where the dead man is.? ?What dead man?? ?I?ve got a dead man in my tent that nobody can throw out.? Nurse Cramer turned to Dunbar desperately for help. ?Make him stop saying things like that,? she begged. ?Maybe there?s no one inside,? Dunbar suggested helpfully. ?Maybe they just sent the bandages here for a joke.? She stepped away from Dunbar in alarm. ?You?re crazy,? she cried, glancing about imploringly. ?You?re both crazy.? 59.Nurse Cramer read her thermometer and discovered to her horror that the soldier in white was dead. A1. Look at lines 1-14. Explain why Yossarian chooses to stay in the hospital. [10] A2. Look at lines 15-39. What are Yossarian?s thoughts and feelings in these lines? Think about: ? his attitude to the hospital; ? his attitude to the soldier in white; ? his attitude to Nurse Cramer. [10] A3. Look at lines 40-59. Nurse Cramer is upset in these lines. How does the writer show that she is upset? Look at: ? what happens; ? the writer?s choice of words and phrases. [10] Answers: A1: Yossarian chose to stay in the hospital because he could relax there. ...read more.