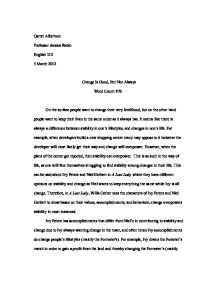 Change Is Good, But Not Always - in A Lost Lady, Willa Cather uses the characters of Ivy Peters and Niel Herbert to show, based on their values, accomplishments, and behaviours, change overpowers stability in most instances.

Garret Albertson Professor Jessica Rabin English 112 5 March 2012 Change Is Good, But Not Always Word Count: 876 On the surface people want to change their very livelihood, but on the other hand people want to keep their lives in the same order as it always has. It seems like there is always a difference between stability in one's lifestyles, and changes in one's life. For example, when developers build a new shopping center many may oppose to it however the developer will most likely get their way and change will overpower. However, when the plans of the center get rejected, then stability can overpower. This is as such in the way of life, as one will fine themselves struggling to find stability among changes in their life. This can be said about Ivy Peters and Niel Herbert in A Lost Lady where they have different opinions on stability and change as Niel wants to keep everything the same while Ivy is all change. ...read more.

succeeded by cutting the phone wire on Mrs. Forrester's call to the man she was having an affair with (Frank Ellinger) "...she began talking wild, and I cut the telephone wire behind your desk." (115). In addition to their contrasting accomplishments, Niel and Ivy also have contrasting behaviors towards stability and change. For example, Niel's behavior toward change is none too kind especially towards Ivy Peter's treatment of the Forrester's after the draining of the marsh. For example when, Ivy invites his self to lunch after going back to work on the marsh Niel asks Mrs. Forrester: "Why do you allow him to speak to you like that, Mrs. Forrester?" (104), this shows that Niel is not too fond of Ivy Peter's behavior in terms of respect towards others in the aspect of the change in Ivy after he drained the marsh. Ivy's behavior seems to sharply change from the first part to the second part of the story, and Niel behavior seems stable. ...read more.

For example, Niel values spending time with the Captain Forrester throughout his strokes "He was kept in bed for three weeks, and Niel helped Mrs. Forrester and Ben Keezer take care of him"(78). And again near the end of the novel when Niel offered to stay in Sweet Water instead of going to Boston "I don't see how I can go back to Boston and leave the Forresters." (120) this shows Niel has not change and he still cares for the Forresters. Ivy Peters and Niel Herbert are no doubt two completely different characters with differentiating personal views on the changes in Sweet Water, but in the end Ivy Peters constant changes overpowered the stability of Niel's throwback lifestyle. Which makes a person wonder if change is a good thing? Well if you take those lessons form Ivy Peters you may find yourself on top of the world by making money off of cutting down and changing things you don't like. However a person could benefit from these changes if one attempts to change things correctly, and you may change for the better. ...read more.