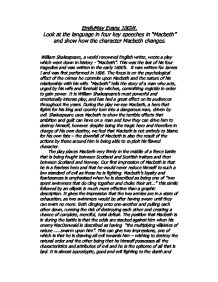 EmilyMay Evans 10GW. Look at the language in four key speeches in "Macbeth" and show how the character Macbeth changes. William Shakespeare, a world renowned English writer, wrote a play which went down in history - "Macbeth". This was the last of his four tragedies and was written in the early 1600's. It was written for James I and was first performed in 1606. The focus is on the psychological effect of the crimes he commits upon Macbeth and the nature of his relationship with his wife. "Macbeth" tells the story of a man who acts, urged by his wife and foretold by witches, committing regicide in order to gain power. It is William Shakespeare's most powerful and emotionally intense play, and has had a great effect on its audiences throughout the years. During the play we see Macbeth, a hero that fights for his king and country turn into a dangerous man, driven by evil. Shakespeare uses Macbeth to show the terrible effects that ambition and guilt can have on a man and how they can drive him to destroy himself, however despite being the tragic hero and therefore in charge of his own destiny, we feel that Macbeth is not entirely to blame for his own fate - the downfall of Macbeth is also the result of the actions by those around him in being able to exploit his flawed character. The play places Macbeth very firmly in the middle of a fierce battle that is being fought between Scotland and Scottish traitors and then between Scotland and Norway. Our first impression of Macbeth is that he is a fearless hero and that he would never reduce himself to such a low standard of evil as those he is fighting. Macbeth's loyalty and fearlessness is emphasised when he is described as being one of "two spent swimmers that do cling together and choke their art..." ...read more.

influenced highly by his wife, he has now discovered that he is able to stop this from happening and chooses against doing so, when he states "I have no spur to prick the sides of my intent, but only vaulting ambition, which o'erleaps itself" suggesting that there is nothing driving him on but his own ambition with no justification. The use of elemental language and metaphors increases the will he won't he feeling that Shakespeare is giving his audience. When Macbeth says the words "which o'erleaps itself" which suggests that if you want something so badly you can over do it, miss what you were aiming to achieve and damage yourself. When the dagger appears before Macbeth, symbolising destruction and evil, he hesitates repeatedly before he grasps it. At first there is a sense of uncertainty when Macbeth asks himself "Is this' a dagger which I see before me the handle toward my hand? Come, let me clutch thee" the dagger is showing the chaos that Macbeth is about to unleash. The fact that Shakespeare begins this speech with a rhetorical question on one hand emphasises the uncertainty and on the other hand it emphasises the dedication and strive that Macbeth is feeling. You are given the impression that Macbeths mind has now been consumed by evil, that there is not much of a hero left inside of him. There is a great contrast between this speech and the previous speech's. Macbeth is no longer a strong and loyal character, he is becoming less in charge of his own fate and destiny by the day. His heroism is deteriorating. This could symbolise Macbeth's future in a way, showing that one action or decision - no matter how insignificant or life threatening can change a person or the natural order. When Macbeth cries "Come, let me clutch thee" it's almost as if he is pleading with the dagger, as though it is in charge. ...read more.

The phrase "struts and frets" gives the impression of an actor performing poorly, over acting and thinking he is someone of importance. Shakespeare also suggests that we are all bad actors playing in our "hour upon the stage" the time space of an hour is nothing, such a small part of history also the word stage is associated with theatre and the closing of curtains symbolises the end of show whereas in this context it symbolises the end of life, the final performance. "And then is heard no more: it is a tale Told by and idiot, full of sound and fury, Signifying nothing." There is a suggestion that once a show has ended the actors will be forgotten, talked of no more. It's also suggested that life is just a tale, not even a decent story. Macbeth is claiming that most humans do the same and fear to be different, however when you attempt to be different it can turn the tables and end being to your disadvantage. The words "signifying nothing" suggest that life has no meaning and there is sheer nothingness at the heart of our existence. There is a sense of nihilism, where there value of anything is no longer seen. These words also some up the final stage of development in Macbeth's character. The story of Macbeth sends a strong message throughout, a message that even the bravest, strongest and most loyal of people when submitted to an opportunity that can prove to be to their advantage, can lose control over themselves and allow evil to inhabit their body, mind and spirit. The influence of others can have a great impact on your actions and thoughts. When opened to even a small amount of evil and greed, your desires can take over and trap you. Macbeth has destroyed his purpose in life and sold his soul to the devil for nothing but an empty promise. ...read more.