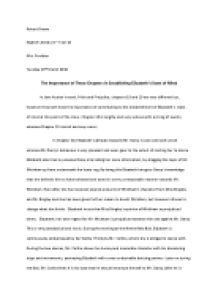 ﻿Robert Brown English Literature ? Year 10 Mrs. Prudden Tuesday 16th March 2010 The Importance of These Chapters in Establishing Elizabeth?s State of Mind In Jane Austen?s novel, Pride and Prejudice, chapters 18 and 19 are very different but, however they both have the importance of contributing to the establishment of Elizabeth?s state of mind at this point of the story. Chapter 18 is lengthy and very serious with a string of events, whereas Chapter 19 is brief and very comic. In Chapter 18, Elizabeth?s attitude towards Mr. Darcy is very cold and uncivil whereas Mr Darcy?s behaviour is very pleasant and even goes to the extent of inviting her to dance. Elizabeth also tries to provoke Darcy into telling her more information, by dragging the topic of Mr. Wickham up from underneath the dusty rug. ...read more.

Darcy, after he is aware to the fact that he is the nephew of his dear Lady Catherine de Bourgh. Considering the time period of this novel, it was very rude and ignorant of Mr. Collins to attempt to acquaint himself with Mr. Darcy without a formal introduction. Elizabeth was highly embarrassed as the reception that was received by Mr. Collins. Mr. Darcy was shocked and astounded by this introduction resulting in very abrupt and arrogant answers given to Collins. Further on Elizabeth was appalled by the presence of her family as her mother, Mrs. Bennet, decides to broadcast her happiness on the progressing relationship of Jane and Mr. Bingley. She also depicts her hopeful beliefs on their possible marriage, in the close proximity of Mr. Darcy. Also Mary Bennet accepts an invitation of singing and playing at the piano, and is insensitive towards Elizabeth?s subtleties that she should reject. ...read more.

Collins keeps on pushing Elizabeth. Both the events and conversations in these two chapters contribute to Elizabeth?s state of mind in a very large manner. Elizabeth?s state of mind is very negative and prejudiced. Her embarrassments induced by her relations have caused her mind to be in a negative status. Also the proposal by Mr. Collins simply added to Elizabeth?s dismay and embarrassment of what happened the previous evening at the Netherfield Ball. Chapter 19 was relatively humorous due to Mr. Collins proposal and multiple speeches. Chapter 18 was rather serious as a result of heated discussions between Darcy and Elizabeth, the embarrassment of Mr. Collin?s introduction to Darcy, the performance given by her younger sister Mary and of course, the manner of Mrs. Bennet?s talks to the society about Jane and Mr. Bingley?s hopeful marriage. These two chapters were not a good time for Elizabeth. ...read more.