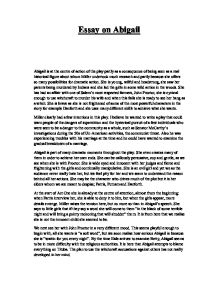 Character analysis on Abigail (The Crucible)

Essay on Abigail Abigail is at the centre of action of the play partly as a consequence of being seen as a real historical figure about whom Miller undertook much research and partly because she offers so many possibilities for dramatic action. She is young, wilful and headstrong, she saw her parents being murdered by Indians and she led the girls in some wild antics in the woods. She has had an affair with one of Salem's most respected farmers, John Proctor, she is cynical enough to use witchcraft to murder his wife and when this fails she is ready to see her hang as a witch. She is brave as she is not frightened of some of the most powerful characters in the story for example Danforth and she uses many different skills to achieve what she wants. Miller clearly had a few intentions in this play. I believe he wanted to write a play that could warn people of the dangers of superstition and the hysterical pursuit of a few individuals who were seen ...read more.

It is from here that we realise she is not the innocent child she seemed to be. We next see her with John Proctor in a very different mood. This seems playful enough to begin with, all she wants is "a soft word", but we soon realise how serious Abigail is because she is "waitin for you every night". By the time Hale arrives to examine Betty, Abigail seems to be in more difficulty with the religious authorities. It is here that Abigail attempts to blame everything on Tituba. The plan to use the witchcraft accusations against others has not really developed in her mind. Only later on does she see how she might avoid punishment herself by naming other witches and the children are all too ready to follow her, leading to the extraordinary hysteria of the final moments of Act one where the girls start calling out names and Abigail wanting "the light of god, I want the sweet light of Jesus." ...read more.

At this point Mary surrenders to Abigail and Proctor is consequently arrested. Abigail is never seen again. We hear that she has run away with Mercy Lewis and thirty one pounds was stolen from her uncle Parris. In the screenplay, written by Miller, she asks him to run away with him but this scene is not in the play. Her frustrated need to be loved and cared for in a community, which was always short of love and care and fierce in its religious demands, has brought chaos and death to the town of Salem, which is still remembered today. And yet although it is Abigail who is at the heart of most of the action of the play, Miller does not really appear to blame her for the events that took place. It is those men who should have known better; Danforth, Hale, Parris, Putnam and even Proctor, who must bear the moral responsibility for this tragedy. ...read more.