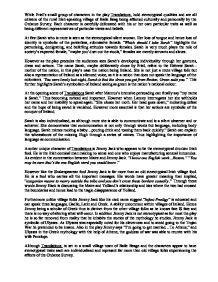 Characters in the play Translations.

While Friel's small group of characters in the play Translations, hold stereotypical qualities and are all citizens of the rural Irish-speaking village of Baile Beag being affected culturally and personally by the Ordance Survey. Each character is carefully delineated with his or her own particular traits as well as being different representatives of particular views and beliefs. At first Sarah who is mute is seen as the stereotypical silent woman. Her loss of tongue and hence loss of identity is symbolic of the powerless, submissive female. "Which should I take Sarah" highlights the patronising, denigrating, and belittling attitudes towards females. Sarah is very much plays the role of society's expected female, "maybe you'd set out the stools," females are merely servants and slaves. ...read more.

"She closes her moth. Her head goes down," indicating defeat and the hope of being saved is vanished. However more essential is that her actions are symbolic of the conquer of Ireland. Sarah is also individualised, as although mute she is able to communicate and is a silent observer and or achiever. She demonstrates that communication is not only through words but language, including body language. Sarah mimes rocking a baby...pouring drink and tossing them back quickly." Sarah can explain the whereabouts of the missing Hugh through a series of mimes. Thus highlighting the importance of language as communication. Another unique character of Translations is Jimmy Jack who appears to be the stereotypical drunken Irish fool. He is the Irish comical man making no sense and one who enjoys manufacturing sensual innuendos. ...read more.

In addition Jimmy Jack is not stereotypical as for most the play he is so far removed from reality that he inhabits the stories of the mythology he studies. Jimmy Jack is symbolic of Ulysses. As Ulysses was especially noted for his cleverness and to avoid going to the Trojan War he pretended to be insane. Also in the play Jimmy says "I'm going to get married...To Athene," and Ulysses in the Greek mythology with the help of Athene, the goddess of war was able to reunite with his wife Penelope. Although Translations is set in a small village town of Baile Beage and the characters appear to have stereotypical traits each are individualised and represent far more then old village folks experiencing the affects of the Ordance Survey. ...read more.

This is a very strong essay that goes to excellently insightful depths with regard to two of Brian Friel's characters in the play 'Translations'. The candidate opts to discuss the characters of Sarah and Jimmy Jack - two characters which ...

This is a very strong essay that goes to excellently insightful depths with regard to two of Brian Friel's characters in the play 'Translations'. The candidate opts to discuss the characters of Sarah and Jimmy Jack - two characters which appear to be minor but, as the candidates shows here, have a great symbolic and historical resonance beyond their more literal presentations. The introductory paragraph is sufficient and indicates that the candidate is fully aware of the plot of 'Translations' and has fully grasped the aim of the question by explicitly stating what they are aiming to achieve in their essay.

The structure is good, allowing for clear and precise analysis of both Sarah and Jimmy Jack in turn, and shows the examiner there has been care taken to ensure that this can be accomplished in the quickest, most efficient method possible. But as well as this, the language with which the candidate uses to form their answer is confident and shows examiners that the candidate is adept and making an interesting and enlightening analysis without having to resort to clichés and formulaic analysis methods. This is good because, when examiners mark dozens of essays that frequent say the same thing, to stand out with insightful analysis and a fresh use of words can only be a good thing.

The Level of Analysis shown here is very good and also very consistent. The candidate briefly introduces the characters as they begin their extensive analysis and show a profound knowledge of the dramatic reference points for Jimmy Jack ('the Shakespearean fool') and historical references for Sarah (the Hebrew derivation of her name). All of which are astounding to include in an essay like this. To show this knowledge on social and historical context, this depth of analysis and this comfortability in written expression at GCSE level indicates a very strong A* candidate. Though some parts of the essay may appear heavy-handed, e.g. - the way the candidate outlines gender inequality for example - this was not such a widely accepted social construct in Ireland as it was in the more colonial countries like Great Britain, France and Spain, as Ireland's cultural reliance and relatively primitive social technologies meant that everyone was treated comparatively equally as an integral part of a family in a large community, so my best advice here is just to be slightly more sensitive in some parts of the analysis. Other than that, this is a sound essay on course for a very high grade.

The Quality of Written Communication would be fine if it were not for some very obvious typing errors such as "Jimmy Hack" and "Mannus". There are further errors ranging from incorrect quoting to not using punctuation appropriately or accurately. These all need to be addressed as they are preventing the essay from reaching the full marks it would otherwise receive if only the candidate paid more attention to their written expression.