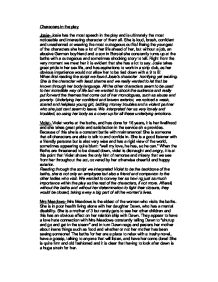 Characters in the play

Characters in the play Josie- Josie has the most speech in the play and is ultimately the most noticeable and interesting character of them all. She is loud, brash, confident and unashamed at wearing the most outrageous outfits! Being the youngest of the characters she has a lot of her life ahead of her, but without a job, an abusive German boyfriend and a son in Borstal she constantly turns up at the baths with a outrageous and sometimes shocking story to tell. Right from the very moment we meet her it is evident that she has a lot to say. Josie takes great pride in her s*x life, and has aspirations to work in a strip club, as her obvious impatience would not allow her to be tied down with a 9 to 5! When first reading the script we found Josie's character horrifying yet exciting. She is the character with least shame and we really wanted to let that be known through her body language. All the other characters seem to be used to her incredible way of life but we wanted to shock the audience and really put forward the themes that come out of her monologues, such as abuse and poverty. ...read more.

As she is around the same age as Josie we wanted to provide a distinct comparison between the two. We didn't want to make Dawn appear completely stupid and dependent on her mother, as although she is a very comical character, it is not something we wanted to use just to gain a laugh. Jane- Jane is a friend of Nancy's from school but has been visiting the baths for a lot longer. A divorcee with a young son, Jane has gone back to university to study Islamic history. Although from the same social class as Nancy, with the same schooling and coming from a "good home", she lives off a grant and without the income of a male, like the majority of women that visits the baths. This is a point of aggravation for her and much of her speech revolves around the men in her life, past and present. She has a very clear opinion of what she thinks about men and isn't afraid to voice it, perhaps being the most feministic of all the women. She is certain of what she wants in life but is also very sensitive, particularly about her past. ...read more.

process I realised that the qualities she has, and the fact that she appears in such way in the text was in fact deliberate. It was challenging having to play someone who I couldn't relate to atal, despite being cast for the role because I was thought appropriate for it! I did many things to develop Nancy as a character. I focused on getting into her shoes, literally, by practising her walk and pyhsicalisation through the act. For example, when she first enters she is full on confidence and walks with an heir of confidence but this is destroyed by nasty glances from Josie and as time goes on through this scene her body language is very closed. I had to concentrate on making her voice very posh and so watched television shoes to acquire this. I used staneslaski techniques such as breaking down the objectives of lines such as when talking of her finaical status to going on to telling Josie that her husband left her. These 2 topics, although said in the same conversation depicted a very different mood and feeling from her. I used emotion memory when talking about her husband to gain a sense of sadness, concentrating on ordeals from my own life that stirred these emotions. ...read more.