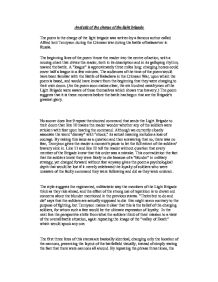 charge of the light brigade essay

Analysis of the charge of the light brigade The poem is the charge of the light brigade was written by a famous author called Alfred lord Tennyson during the Crimean war during the battle of balacarver in Russia. The beginning lines of the poem throw the reader into the centre of action, with a rousing chant that drives the reader, both in its description and in its galloping rhythm, toward the battle. A "league" is approximately three miles long: charging horses could cover half a league in a few minutes. The audiences of the time of the poem would have been familiar with the Battle of Balaclava in the Crimean War, upon which the poem is based, and would have known from the beginning that they were charging to their own doom. (As the poem soon makes clear, the six hundred cavalrymen of the Light Brigade were aware of these themselves which shows true bravery.) The poem suggests that it is these moments before the battle has begun that are the Brigade's greatest glory. ...read more.

The first three lines of this stanza are basically identical, changing only the location of the cannons, presenting the layout of the battlefield visually, instead of simply stating the fact that there were cannons all around. By repeating the phrase three times, the reader is not only given information about the tremendous odds against the Light Brigade, but the poem gives the feeling of being surrounded creating fear. This states that any one going in to that is very brave. "Stormed" in the next line states the image of "thundered" from the line before it, making the barrage of cannon fire aimed at the cavalrymen appear almost like a force of nature. After that makes a point of mentioning that the soldiers of the Light Brigade were brave, but also that they rode their horses well. Their skill is mentioned almost as an afterthought, though, and this is the only place in the poem that it is brought up. Tennyson expands the phrase that was used to end the first two stanzas: instead of the "Valley of Death," he uses the metaphor "jaws of Death," and extends this metaphor with "mouth of h**l." ...read more.

show how much trouble they are in shows that they are brave to still be there, also it is mentioned again as the survivors make their escape. It is saying that all the survivors are heroes strengthening the argument for people to fight for there country as then they will be heroes. The focus of the poem shifts in this stanza, from describing the battle scene to addressing the reader directly. In using the description "wild" to marvel at the charge, the next line implies that thoughtless bravery is to be admired in and of itself, regardless of concerns about strategy or success. Repeating the line "All the world wondered" adds to the idea that what the soldiers have done goes beyond the average person. The poem does not rely upon a reader's understanding, but directly tells the reader to honour these soldiers and that it is good to copy them . The poem is so straightforward about its intent as an indicator that it was written for a common, often uneducated, audience, to celebrate the actions of common soldiers to do every tghing the leaders say. ...read more.