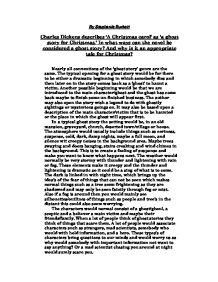 By Stephanie Burkett Charles Dickens describes 'A Christmas carol' as 'a ghost story for Christmas.' In what ways can the novel be considered a ghost story? And why is it an appropriate tale for Christmas? Nearly all conventions of the 'ghost story' genre are the same. The typical opening for a ghost story would be for there to be either a dramatic beginning in which somebody dies and then later on in the story comes back as a 'ghost' to haunt a victim. Another possible beginning would be that we are introduced to the main character/ghost and the ghost has come back maybe to finish some un-finished business. The author may also open the story wish a legend to do with ghostly sightings or mysterious goings on. It may also be based upon a description of the main character/victim that is to be haunted or the place in which the ghost will appear first. In a typical ghost story the setting would be, in an old mansion, graveyard, church, deserted town/village or house. The atmosphere would usually include things such as eeriness, suspense, cold, dark, damp nights, maybe a full moon, and silence wit creepy noises in the background area. Maybe trees swaying and doors banging, stairs creaking and wind chimes in the background. This is to create a feeling of suspense and make you want to know what happens next. The weather would normally be very stormy with thunder and lightening with rain or fog. These elements make it creepy and the thunder and lightening is dramatic so it could be a sing of what is to come. ...read more.

He realises everybody he has talked to have been ghosts. It has the main character that you would expect of a ghost story. It includes Cole a young child that is the victim of these 'attack', Malcolm a doctor (who is the ghost), the Childs mother, and the doctor's wife, evil ghosts, and other less important characters. The main setting is in the houses of the child and the doctor but also in the child's imagination. A lot of the attacks happen when the young boy is alone/during the night as this makes it more suspicious. The opening is conventional as it has a death before the actual main story begins. During the opening we get a flash back on the story so that we know what has already happened at what is to come. Although nothing becomes clear until the very end. It has a typical plot outline as it is based upon a series of hauntings to main victim. It also has typical weather in some places. Dull, cold and stormy. The ending could also be seen as a typical one as it is closed and the mystery as to why Cole is being haunted is sorted out. This is a very good example of a modern day ghost story as it has the haunted aspect but also the violence of the new age story lines. A Christmas carol can be seen as a ghost story for a few reasons. It is in the first stave that we meet Ebenezer Scrooge, a miserable but wealthy old man. Scrooge works in his counting house with his clerk, Bob Cratchit. ...read more.

In a Christmas carol a lesson is to be taught to scrooge by the ghosts. At the beginning scrooge is a selfish, inconsiderate man who only cares for him self. The ghosts come and help him to see what his life has been and how he much changes. They try to show him not to be unfair and selfish at Christmas but to be caring and giving and to help those in need. A moral that people could gain from this story could be look out for other's as well as yourself this Christmas...have a heart. Meaning have a permanent positive affect on other, help them out and let them share your love this Christmas. I believe that looking from everything we have studied that "A Christmas carol" can be seen as a ghost story but only in some ways. For instance the ghosts only appear once each through out the whole story then never come back, most ghosts continue to haunt/bully their victim until there whole duty is for filled. Although in this story the ghosts job was to try to help Scrooge to change his ways and this they succeeded in. Also the first ghost was described as a phantom, which is a stereotypical ghost, so this would also back up the ghost story fact. However I believe that is more then jus at ghost story. I believe it is a piece of writing that this been done to prove a point that Christmas is a time for giving, to love and look after those in need. It has a moral fable aspect in it. It describes a very Christmas like atmosphere and you could just picture it. Overall I believe that it is more of a tale for Christmas than a ghost story. ...read more.