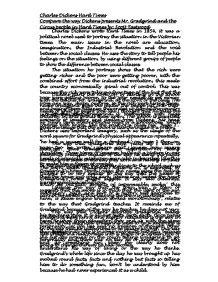 Charles Dickens wrote Hard Times in 1854, it was a political novel used to portray the situation in the Victorian times. The main issues in the novel are education, imagination, the Industrial Revolution and the void between the social classes.

Charles Dickens wrote Hard Times in 1854, it was a political novel used to portray the situation in the Victorian times. The main issues in the novel are education, imagination, the Industrial Revolution and the void between the social classes. He uses the story to tell people his feelings on the situation, by using different groups of people to show the difference between social classes. The situation he portrays shows that the rich were getting richer and the poor were getting poorer, with the combined effort from the industrial revolution, this made the country economically spiral out of control. This was because the rich were taking advantage of the fact that the poor were getting poorer. So the poor needed to get money from any way, shape, or form, so the rich were hiring them, and paying them pittance, this ended up turned the country into economic chaos. Dickens starts the novel off by starting in the school with the teacher Mr. Gradgrind, at the front of the class. The name Gradgrind gives the reader the image put into their heads of what he might look like I thought that he takes the children in and grinds them down. The school is described as 'plain, bare, a monotonous vault of a schoolroom,' which gives the image that the school is like the inside of a prison. At the start Gradgrind is bombarded with huge amounts of imagery and similes from Dickens, 'his head covered with knobs, like the crust of a plum pie,' 'page 2'. ...read more.

This was because of the way that she was raised, the way she has no personality. The only reason that that she married Bounderby was because she thought there was nothing left to live for in her life and said, 'there is no pain in living and married Bounderby'. Tom is seen as weak, selfish and nasty and often known as a "whelp" Tom blames it all on his upbringing and he would have a different personality if his up bringing was more light-hearted and not so factual. Tom main worst act of selfishness was when Tom robbed the bank and had Stephen stand out side it so he was seen to be the main suspect. Even when his sister Louisa tries to help him out from his gambling debt he just shouts abuse at her, saying that she should have been there when she was needed the most. All of this shows Tom to be very selfish and uncaring to the people around him he is closest to. When the circus are first introduced they are portrayed by Dickens to be as colourful,' golden stars stuck all over him.' Made to seem as if they are just ordinary people, "ith it the intenthion to do anything for the poor girl Thquire," Sleary is given a lisp to make the circus people sound like more ordinary people. When Gradgrind and Bounderby come and talk to Sleary, Sleary takes an immediate dislike to Bounderby and almost ignoring every thing Bounderby has to say. ...read more.

The fact that Tom was helped by the circus to escape, is ironic in some ways because of the way that lower class people, were willing to help out the upper class people, but the upper class people were never willing to help the lower class people, this might in someway shows that imagination has achieved what factual learning never could. Therefore, I draw to my conclusion is that Gradgrind's family were in the novel to represent the richer class of England and the circus was the poor. The way the circus people were described made them seem fictional (almost too good to be real). People from Gradgrind's house were as unrealistic as the circus people but had the more authentic points to them. Charles Dickens had clearly set out to portray his feelings on the country, he had gone at it full force with his point at the hope when people read his novel they could see just what was going on. He is tying to say that he wants to see changes in the modern society, like the poor being treated as equals to the rich and the rich to stop taking advantage to the situation of the Victorian times. In the end it is seen as a small triumph for the richer classes in the story because Gradgrind final realises how wrong he was and starts to make a change in the way he lived. Dickens hoped that the upper classes would follow his examples. Charles Dickens Hard Times Compare the way Dickens presents Mr. Gradgrind and the Circus people in Hard Times by: Scott Eastwood 1 ...read more.