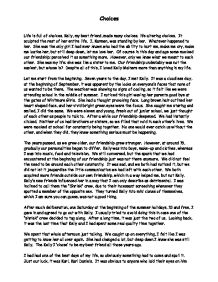 Choices Life is full of choices. Kelly, my best friend, made many choices; life altering choices. It sculpted the rest of her entire life. I, Karmen, was standing by her. Whatever happened to her. She was the only girl I had ever known who had the ability to hurt me, make me cry, make me loathe her, but still deep down, let me love her. Of course in this day and age some mocked our friendship; perceived it as something more. However, only we knew what we meant to each other. She was my life; she was like a sister to me. Our friendship undeniably was not the easiest, but whose is? Despite all of this, I loved Kelly Mainers more than anything in my life. Let me start from the beginning. Seven years to the day, I met Kelly. It was a cloudless day, at the beginning of September, it was apparent by the looks on everyone's faces that none of us wanted to be there. The weather was showing no signs of cooling, so it felt like we were attending school in the middle of summer. I noticed this girl waving her parents good bye at the gates of Whitmore Girls. She had a thought provoking face. Long brown hair outlined her heart shaped face, and her vivid bright green eyes were the focus. She caught me staring and smiled, I did the same. We were eleven and young, fresh out of junior school, we just thought of each other as people to talk to. After a while our friendship deepened. We had instantly clicked. Neither of us had brothers or sisters, so we filled that void in each other's lives. We were mocked at school for constantly being together. No one would ever catch us without the other, and when they did, they knew something serious must be happening. The years passed, as we grew older, our friendship grew stronger. However, at around 15, gradually our personalities began to differ. ...read more.

This just consolidated my suspicions. My best friend was a liar. "Yeah, I know. He looked too buff that night. He was so sweet. I'm glad my first time was with him," I heard Kelly say. Since when had rapists been sweet? It was not that I was eavesdropping; more determination determined to unveil the truth. "Seriously! Yeah I heard from someone that you got off with him that night! How was it? You're such a lucky b***h, us lot would all kill to be with Karl!" the unknown gossip hungry girl said. "Look, I ain't the type of girl who kisses and tells you know! You wana know what went on, you have to ask him," clearly Kelly was avoiding the question. So, did this mean she was raped? I mean at the beginning of the conversation, it sounded like she had wanted this to happen; am I right? However, towards the end, it was the complete opposite to that. I had concluded that if I was going to get my answers, there were two things that I needed to do and have a) courage and b) confront her. Eventually, I did muster up enough courage to confront her. The thought of Kelly hiding all her pain from people was hurting me. Did she not trust others with her secret? Obviously the paranoid side of me kicked in and I thought that maybe she had not been raped, and it was all a ploy to get attention from me. I mean we had grown apart but lying about something so serious, that was uncalled for. Therefore, the purpose of the conversation was to get the truth, the real truth from what they call the 'horse's mouth'. In a way, deep down, at that time, I thought I knew the truth, I just needed to hear it for myself. "Kelly, did Karl r**e you or not? ...read more.

Kelly and I had both made many choices in our lives. Hers, however, were very drastic. It all started when she chose Karl over me. If she had not she probably would not be dead right now. The grief I was undergoing inside of me was overwhelming, all I could think of was "what if I had just gone with her to that party?" "What if I had just believed her and not confronted her that day?" "Returned all her phone calls". All these questions were literally eating me alive. For the first time in my life, I felt guilty. It was terrible; it was like a wave of heat frequently swept over me. Every time this happened, I felt like being sick, I hated it; I wanted all this grief to go. The recollection of the letter brought tears to my eyes. What must she have been feeling when she wrote it? I was astounded ... she was gone, and I could not come to terms with it. The other day the "shriek" crew decided to confront me, they blamed me for her death. They are truly heartless. I had just lost a best friend and they were lecturing me about how I should not have ignored all her calls etc. What do they know? They were the downfall of Kelly, if she had just realised they were not the right sort of people she should have been hanging around with, she may have been alive at this moment in time. It was the day of her funeral. Kelly's parents were distraught; they could not fathom what made her do this. According to them, Kelly was always such a happy girl, and towards the end, she had shown no signs of feeling suicidal. Evidently, they were not the most observant parents. The last choice that I made concerning Kelly was to give the eulogy at her funeral. It was my last attempt to discern why, why I neglected her in the recent months. Then it came to me - it was my choice to. ...read more.