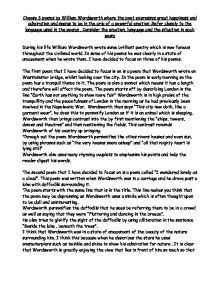 Choose 3 poems by William Wordsworth where the poet expresses great happiness and admiration and seems to be in the grip of a powerful emotion .Refer closely to the language used in the poems , Consider the emotion, language and the situation in each poem

Choose 3 poems by William Wordsworth where the poet expresses great happiness and admiration and seems to be in the grip of a powerful emotion .Refer closely to the language used in the poems , Consider the emotion, language and the situation in each poem During his life William Wordsworth wrote some brilliant poetry which is now famous throughout the civilised world. In some of his poems he was clearly in a state of amazement when he wrote them. I have decided to focus on three of his poems. The first poem that I have decided to focus is on is a poem that Wordsworth wrote on Westminster bridge, whilst looking over the city. In the poem is early morning so the poem has a tranquil theme to it. The poem is also a sonnet which means it has a length and therefore will affect the poem. ...read more.

This poem was written when Wordsworth was in a carriage and he drove past a lake with daffodils surrounding it. The poem starts with the same line that is in the title. This line makes you think that the poem may be depressing as Wordsworth uses a simile which is often thought upon to be dull and uninteresting. Wordsworth personifies the daffodils that he sees be referring them to be in a crowd as well as saying that they were "Fluttering and dancing in the breeze". He also tries to glorify the sight of the daffodils by using alliteration in the sentence "Beside the lake , beneath the trees". I think that Wordsworth was in a state of amazement of the beauty of the nature surrounding him. I think this because when he describes the stars he uses onematerpiers such as twinkle and shine to show his admiration for nature . ...read more.

He continues to say how it was a "time of rapture" indicating that he was greatly enjoying himself.another reason why I believe that Wordsworth is enjoying himself is because he describes himself when he moves across the ice as being proud and exulting, he also uses two onamatapiers ; hiss'd and polish'd to help describe his joy. He then goes on to describe the games that they played on the ice, this also helps us understand that this was a joyful time for Wordsworth as he mentions how his games were imitative of a hunt and as children enjoy mimicking their elders this would have been fun for Wordsworth and his peers. The poem then focuses on the surroundings and describes the leafless trees and the distant hills. This help add a nostalgic feeling to the poem which is slightly surreal. On the final two lines the poem slows down as Wordsworth describes the sun as setting. ...read more.