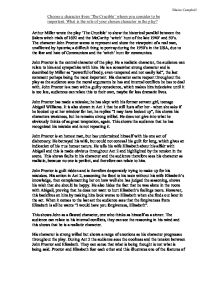 Choose a character from 'The Crucible' whom you consider to be important. What is the role of your chosen character in the play?

Arthur Miller wrote the play 'The Crucible' to show the historical parallel between the Salem witch trials of 1692 and the McCarthy 'witch' hunt of the late 1940' and 50's. The character John Proctor seems to represent and show the viewpoint of a real man, unaffected by hysteria; a difficult thing to portray during the 1950's in the USA, due to the fear and hate of Communism and the 'witch' hunt for communists. John Proctor is the central character of the play. He a realistic character, the audience can relate to him and sympathize with him. He is a somewhat strong character and is described by Miller as "powerful of body, even-tempered and not easily led", the last comment perhaps being the most important. His character earns respect throughout the play as the audience sees the moral arguments he has and internal conflicts he has to deal with. John Proctor is a man with a guilty conscience, which makes him indecisive until it is too late, audiences can relate this to their own, maybe far less dramatic lives. John Proctor has made a mistake; he has slept with his former servant girl, teenage Abigail Williams. It is also shown in Act 1 that he still lusts after her - when she asks if he looked up at her window for her, he replies "I may have looked up", this shows his characters weakness, but he remains strong willed. ...read more.

The fact that John Proctor's name means so much to him shows the audience that it is worth a lot, therefore well respected. His name is described as "weighty" by Parris and the court go out of their way in Act 4 to try and persuade John Proctor to change his mind and confess. This is a big difference from in Act 2, where Cheever and Hale choose to ignore Mary Warren's confession to owning the doll, which should have let Elizabeth Proctor off her charge. This shows the strength of their fanaticism about hunting down and persecuting witches; this later backfires on them. This is one of the reasons why they strive for John Proctor to give his name up, they fear the discontent which will come from Proctor be hanged. Parris' fears of being thrown from his pulpit are escalated to drive him to act against his character. This shows what an effective name John Proctor is to the society and perhaps explains why he values it so much himself. Proctor seems to identify the weaknesses of the court; he himself is not affected by the hysteria of the witches. He comments at the beginning of the play in Act 1, in the presence of Reverend Hale, Parris and Giles Corey, in a way that shows the audience and other characters that he does not believe in witches and this causes great discontent with the fundamental Christians of Salem, which interpret everything in the Bible literally. ...read more.

All these traits make John Proctor an admirable, realistic character, the type of character that audiences can understand and ultimately try to follow his example of following in his footsteps. Author miller uses the title 'The Crucible' as a metaphor for John Proctor's character in the Salem witch trials of 1962. His character is put under tremendous heat and comes out pure. Miller uses this realistic character to show how ridiculous but powerful hysteria can be. He portrays his own feeling about the McCarthy witch trials in America during the late 1940's and early 1950's through John Proctor's character. He shows through his play his feelings about how disloyal people were, but he could not do this without using the historical parallel, as he knew himself what height the communist hysteria had reached. Like the witch hysteria in Salem, he knew that he would be persecuted for writing about fear and conscience if he were to set the play in contemporary America. Miller uses John Proctor to almost play himself and to show what he would do if put in the position of being on trial. He later proved his point by not accusing any other people of being in communist parties when he really was put on trial, to get himself off the hook, like so many other people did. John Proctor plays the crucial role in 'The Crucible' of being the man that is on the brink of giving in but stands strong, even though he knew that one individual would not bring down the hysteria. ...read more.