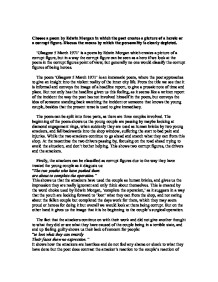 Choose a poem by Edwin Morgan in which the poet creates a picture of a heroic or a corrupt figure. Discuss the means by which the personality is clearly depicted. `Glasgow 5 March 1971' is a poem by Edwin Morgan which creates a picture of a corrupt figure, but in a way the corrupt figure can be seen as a hero if we look at the poem in the corrupt figures point of view, but generally no one would classify the corrupt figures of being heroes. The poem `Glasgow 5 March 1971' is an instamatic poem, where the poet approaches to give an insight into the violent reality of the inner city life. From the title we see that it is informal and conveys the image of a headline report, to give a prosaic note of time and place. But not only has the headline given us this feeling, as it seems like a written report of the incident the way the poet has not involved himself in the poem, but conveys the idea of someone standing back watching the incident or someone that knows the young couple, besides that the present tense is used to give immediacy. The poem can be split into three parts, as there are three couples involved. ...read more.

Also the word `smartly' at the end of the line shows us how they are concerned about no one else but to `complete the operation' and gives us the image of the rate of speed they are moving about in. The attackers stand out and the poet conveys them to be corrupt as the pain the couples are in, shocks us, as we are reading the poem, and reveals sympathy: "The young man's face is bristling with fragments of glass and the girl's leg has caught on the broken window and spurts arterial blood over her wet-look white coat ...and the beginning of pain." In these lines the poet shows us how horrific the violent incident is, which creates the attackers to be very inconsiderate and they seem as if they don't belong to human nature. It also shows how the poet in these lines does not use any rhyme, rhythm and versification, but it is short statements to create the image of giving facts about the injuries that happened. From the poem we can see that the girl is in a worse condition than the man, `is bristling with fragments if glass,' this is a metaphor and compares how they tiny pieces of glass are embedded in the man's face and gives us the image of sharp glass around everywhere, but it shows the girl's injuries are far more serious. ...read more.

But it suggests that the weather condition was not terribly bad that the drivers had to focus on the road ahead. The word `clear' emphasises how it must have been easily seen but ignored. This then leads to who is the more corrupt figure the drivers or the attackers, the drivers were being very ignorant and we think to our selves why are they? But the incident was caused by the attackers. The poet makes use of irony throughout the poem which gives us a clearer image of the poem as it shows how fast the poem is going with the violence and the pictures are moving about in our mind. In conclusion the poet has created the attackers to be corrupt as they stand out and we do have a reaction towards them. But throughout the poem the poet shows us all kinds of techniques but at the very last line of the poem Edwin Morgan reveals the message across to us. It makes us wonder about the society we live in, where things happen and are ignored and gives us a brief insight to the violence in the inner city and such ignorance people have. In fact, the last line is very much thought provoking, as why are the drivers so ignorant as well as that it makes us think about the world around us. ...read more.