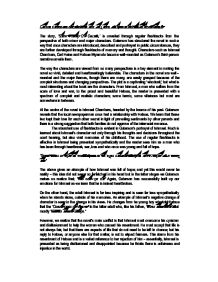 Choose characters and examine how they have been presented in the novel thus far - 'Snow Falling On Cedars'.

Choose characters and examine how they have been presented in the novel thus far The story, 'Snow Falling On Cedars,' is unveiled through regular flashbacks from the perspective of both minor and major characters. Guterson has structured the novel in such a way that once characters are introduced, described and portrayed in public circumstances, they are further developed through flashbacks of memory and thought. Characters such as Ishmael Chambers, Carl Heine and Hatsue Miyamoto become well-rounded as Guterson's third-person narrative unveils them. The way the characters are viewed from so many perspectives is a key element in making the novel so vivid, detailed and heartbreakingly believable. The characters in the novel are well - rounded and the major themes, though there are many, are easily grasped because of the complex structures and changing perspectives. The plot is a captivating 'whodunit,' but what is most interesting about the book are the characters. From Ishmael, a man who suffers from the scars of love and war, to the proud and beautiful Hatsue, the reader is presented with a spectrum of complex and realistic characters; some heroic, some villainous but most are somewhere in between. At the centre of the novel is Ishmael Chambers, haunted by the trauma of his past. ...read more.

He must accept that life is not always fair, but that there are aspects of life that do not need to be left to chance; but his reply to Hatsue, or anyone else for that matter, is not to expect fairness. This stems from his resentment of Hatsue and is a veiled reference to her rejection of him - essentially, Ishmael is presented as being disillusioned and disappointed because he thinks there is unfairness and injustice in the world. "I'm talking about people . . . who can do things because they run newspapers or arrest people or convict them or decide about their lives. People don't have to be unfair, do they?" She may still feel some guilt over rejecting Ishmael, but she insists that people do have the power to intervene against chance. Specifically, Hatsue means that Ishmael has the power to affect the future if he chooses to be brave, kind, and mature enough. Ishmael knows that Hatsue is right but has no response to her pleas. As well as this, he insists that facts, and facts alone, should decide the fate of others; he is obsessed; "Facts you can cling to; emotions just float away." ...read more.

However, we do learn that Carl was a slightly ambitious person; "He wanted inglenooks, and an over scaled fireplace." Once again, this increases the sympathy we feel for Carl, as we understand that this rather simple character did actually have aspirations. Fundamentally, Carl's importance to the narrative extends beyond his contradictions and when Carl agrees to sell the seven acres of land to Kabuo, he becomes the first of the novel's major characters to find the strength to put the past behind him. It is ironic, therefore that almost immediately after Carl affirms the power of individual morality, he is killed by the most impersonal of forces; chance. Here Guterson has presented Carl in such a way that has successfully evoked our feelings of empathy towards him. In conclusion, some of the main ideas that are presented in the novel, such as war being a destructive, character-altering experience, the way prejudice effects people, and the power of love and hate are all portrayed through the many perspectives and characters who are effected by the same events and issues; and the way that Guterson has presented these characters in the novel has resulted apparent success that it deserves. James Kennedy L6D ...read more.