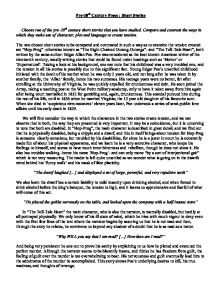 Choose two of the pre-20th century short stories that you have studied. Compare and contrast the ways in which they make use of character, plot and language to create tension.

Pre-20th Century Prose : Short Stories Choose two of the pre-20th century short stories that you have studied. Compare and contrast the ways in which they make use of character, plot and language to create tension. The two chosen short stories to be compared and contrasted in such a way as to examine the tension created are "Hop-Frog" -otherwise known as "The Eight Chained Ourang-Outangs"- and "The Tell-Tale Heart", both written by the same author: Edgar Allan Poe. Poe was considered as the best known American writer of the nineteenth century, mostly writing stories that could be found under headings such as 'Horror' or 'Supernatural'. Taking a look at his background, one can note that his childhood was a very troubled one, and the tension in all his stories is possibly due to this significant fact. Young Edgar Poe's unsettled childhood initiated with the death of his mother when he was only 2 years old, and not long after he was taken in by another family, the 'Allan' family, hence his two surnames. His teenage years were no better, for after enrolling at the University of Virginia, he was quickly expelled for drunkenness and debt. He soon joined the Army, taking a teaching post at the West Point military academy, only to have it taken away from him again after being court martialled in 1832 for gambling and, again, drunkenness. ...read more.

As we learn of the plot, more tension builds up around how the narrator prepares, in an insanely obsessive way, the murder he wishes to commit. We sense right from the commencement a sense of tension behind the speaker's words, and as he narrates the story, his agitation rises, and visibly reaches a peak at the arrival of the officers in the room where he hid the body. In "Hop-Frog" the tension doesn't start at the beginning. The initial description is of life in a "normal" medieval court. With the benefit of hindsight due to the text being written in 3rd person, the narrator gets hints of tension by clues such as the emphasis placed on jokes and the subtle information that this court is not like any other court for its king has a special likeness for practical and verbal jokes. "I never knew any one so keenly alive to a joke as the king was." This intrigues the reader though it doesn't create a lot of apparent tension. Tension starts to build up at the end, when the dwarf starts to drink wine and chains the king and his ministers. At that moment the reader feels that trouble is brewing, the tension is clearly visible as Hop-Frog reveals his plans, and as the end approaches there is transparent madness in the air. ...read more.

These enrich the text thus emphasizing the impression of tension that the author wants to create. In "Hop-Frog" there are fewer metaphors and similies, one being the word 'monster' used to describe the king, though there are many more descriptions of Hop-Frog, usually referring to animals. He is said to resemble 'A squirrel, or a small monkey, rather than a frog." And his gait is to be called "something between a leap and a wiggle" which also brings us back to the animal connotations, and a bizarre way of describing the jester. In conclusion, we can clearly see that both stories effectively use tension, though in different ways. The tension in "Hop-Frog" the tension is much more subtle and the end much more unexpected, while the 3rd person point of view doesn't reveal much about the storyline and the ending, and the reader has to read into the discreet clues that the author gives about the emotional state of the characters. In opposition, the blatant tension of "The Tell-Tale Heart" that is shown even in the first two lines of the tale. "TRUE! Nervous, very, very dreadfully nervous I had been and am" The tension Poe faced in his life clearly reflects upon the way he writes and the way tension is shown in his prose, through the use of punctuation, language, plot, character description, all indicating tension in his stories. ...read more.