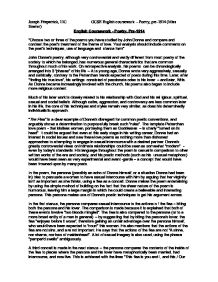 Choose two or three of the poems you have studied by John Donne and compare and contrast the poet's treatment of the theme of love. Your analysis should include comments on the poet's techniques, use of language and stanza form

English Coursework - Poetry, Pre-1914 "Choose two or three of the poems you have studied by John Donne and compare and contrast the poet's treatment of the theme of love. Your analysis should include comments on the poet's techniques, use of language and stanza form" John Donne's poetry, although very controversial and vastly different from most poetry of the society to which he belonged, has numerous general characteristics that are common throughout much of his work. On retrospective analysis, his poems can be chronologically arranged into 3 "phases" of his life - At a young age, Donne wrote very aggressively, s******y and satirically, contrary to the Petrarchan trends expected of poets during this time. Later, after "finding his true love", his writings consisted of passionate odes to his lover - and later, Wife. As Donne became increasingly involved with the church, his poems also began to include more religious content. Much of his later work is closely related to his relationship with God and his religious, spiritual, s****l and social beliefs. Although satire, aggression, and controversy are less common later in his life, the core of his techniques and styles remain very similar, as does his determinedly individualistic approach. "The Flea" is a clear example of Donne's disregard for common poetic conventions, and arguably shows a determination to purposefully break such "rules". ...read more.

He says that the actions of the flea are not "A sinne, nor shame, nor loss of maidenhead". A lot of s****l imagery is also used, using the phrase "pamper'd swells" ambiguously. A third conceit is made in the next stanza - the persona compares the contents of the inside of the flea to places where the persona and his lover have metaphorically been married, had intercourse, and now live. This is achieved with the lines "This flea is you and I, and this / Our mariage bed, and mariage temple is". This conceit is made originally to suggest that they are already married and have had intercourse in a metaphorical sense, creating a pattern of logic that suggests it would be acceptable for her to have intercourse in reality as well. During the last three lines of the stanza, the persona expands on the conceit, finding another use for it - he suggests that if she killed the flea, she would be killing him, killing herself, and destroying a holy place all at the same time. From the beginning of the third stanza, the story has advanced because she has indeed decided to kill the flea. This progressive, time-based writing structure creates a feeling of energy, motion and tension in the poem. ...read more.

The feeling of surprise created at this point is the basis of the "action" of the poem. This is similar to "The Flea", in which the dramatic, climactic moments take place in the third stanza. Both of these poems end on a sort of revelation - the surprising and triumphant comment in "Womans Constancy" of "For by to morrow, I may thinke so too", and the argument "'Tis true, then learne how false, feares bee" in "The Flea" that turns the argument of the persona's lover against her - which create a feeling of intellectualism and smoothness that rounds off Donne's poetic style. Both of these poems would have been considered very controversial during their time, and both represent a great shift in poetic method for Elizabethan society. Most of Donne's inspiration for these two poems - as well as many of his others - seems to be based around the concept of challenging the already established conventions for poetry. Particularly in "Women's constancy", the "roles" of the characters are reversed, a feeling of cynicism and realism is created, and many ideas and opinions of the society Donne lived in are challenged. This way of casually and wittily attacking views and concepts that are common in society may well have been the basis for what is now accepted in the modern world as stand-up comedy. Joseph Fitzpatrick, 11C GCSE English coursework - Poetry, pre-1914 (Miss Heaver) ...read more.