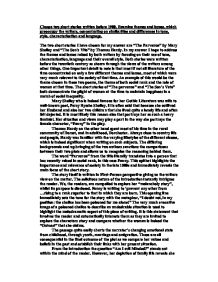 Choose two short stories written before 1900. Examine themes and issues, which preoccupy the writers, concentrating on similarities and differences in tone, style, characterisation and language.

Choose two short stories written before 1900. Examine themes and issues, which preoccupy the writers, concentrating on similarities and differences in tone, style, characterisation and language. The two short stories I have chosen for my answer are "The Parvenue" by Mary Shelley and "The Son's Vito" by Thomas Hardy. In my answer I hope to address the themes and issues raised by both writers by focusing on their use of tone, characterisation, language and their overall style. Both stories were written before the twentieth century as shown through the views of the writers among other things. One important detail to note is that most if not all literature of the time concentrated on only a few different themes and issues, most of which were very much relevant to the society of that time. An example of this would be the theme chosen in these two poems, the theme of both social rank and the role of women at that time. The short stories of "The parvenue" and "The Son's Veto" both demonstrate the plight of women at the time to maintain happiness in a match of social inequality. Mary Shelley who is indeed famous for her Gothic Literature was wife to well-known poet, Percy Bysshe Shelley. It is often said that because she outlived her Husband and also her two children that she lived quite a lonely life and often felt dejected. ...read more.

However, news of the engagement leads her to change her opinion as she anticipates "Long years of happiness for her child". The announcement of the marriage to the remainder of the family offers interesting character insight. f***y's naivet� in relation to her family is most apparent in her interpretation of their emotion. She instantly assumes that their joy is for her future happiness, whilst we simultaneously suspect their greed. Why else would her father "Thank God with rapture" while the others were "transported with delight"? "The Parvenue" provides us with detailed insight into the lifestyle and opinion of "high society" and its attraction for f***y's family. Immediately she reveals that the "Habits of the different sexes in higher ranks [were] so separate from each other". Hailing from a humble background, she was astonished at the "thought of how the rich could spend so much on themselves, while any of their fellow-creatures were in destitution". This is reiterated through her actions. "I denied myself a thousand luxuries, for the sake of feeding the hungry." She affirms strongly, "I dislike the apparatus of wealth". Shelley's use of language in describing f***y's emotions is rich in evocative metaphors, which give insight also into the reasoning behind her charitable deeds. Her refusal to "spend twenty guineas for a gown while [she] could dress many faces in smiles" almost commands admiration and respect. ...read more.

The issue of family loyalty and dedication is central to both stories with similar consequences for the lady in each. "The Son's Veto", however, continues this crux to extremity. The son's audacity in "maintaining his ascendancy" in the issue of his mothers re-marriage is demonstrated by his forcing her to swear not to commit without his consent. Sophie's surrender displays the subservient role women played in relation to men at that time. Similarly, "The Parvenue" illustrates the passive role women were assigned with regards to the distribution of money. f***y, despite her close relationship with a "Large allowance for [her] own expenses", but once aware of her charities, Lord Reginald "peremptorily checked" them. This subject matter is conveyed also in "The Son's Veto" where Sophie "Was left with no control over anything which had been her husbands beyond her modest personal income". Extensive analysis of the two stories has highlighted the similarities within the ploy, style and characterisations of each. However, as aforementioned, strong contrasts are apparent in the writers' tone and language styles, These short stories allow the reader insight into the social opinion of the times, whilst engaging them in the traumatic upheaval in the characters; lives. Both serve as a warning of the potential destruction inherent in wealth and social status. Word Count: 2, 262 Chris Mc Geown 12A2 ...read more.