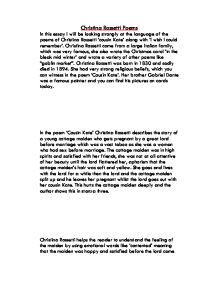 Rossetti suggests the lord is selfish and vain, by referring to the way she describes him although she is very bias towards men. There are many contrasts between the maiden and Kate like love, Rossetti describes the cottage maiden's love for the lord as "true" meaning it is really happening, it exits; subsequently she describes Kate's love for the lord using a metaphor, "writ in sand" showing it could be washed away by the sea. Another dissimilarity is marriage, the lord changed the cottage maiden "like a glove" showing no commitment, although with Kate he "bound you with his ring" showing dedication and assurance. Treatment by the society also contrast between the both, "the neighbours call you good and pure" about Kate "pure" meaning she is free from faults and sins, Rossetti Describes the cottage maiden as "an outcast thing" signifying the society respects Kate and shuns the cottage maiden because of how the maiden got pregnant outside of marriage and Kate is married to the lord. They all deeply disrespect the cottage maiden for the reason that she had sex before marriage. I have noticed the difference between them both also they're living conditions, as the cottage maiden, "howls in dust" Kate, "sits in gold and sings" she is affluent and blissful in her affluent surroundings, whilst the cottage maiden is full of jealousy and hatred. ...read more.

Tones of lyric ballads often change, but are personal and reflective dealing with powerful emotions such as love, anger and betrayal. 'I wish I could remember' is a patriarchal sonnet, which is a very structured regimented poem, which consists of fourteen lines with a set rhyme scheme written in iambic pentameter, lines of ten syllables, which is very difficult to write. The petarchan sonnet; octave- is to present the following ideas, the sestet- completes the idea or to comment upon it. Rossetti's view on the two poems show positive thoughts for "I wish I could remember" by suggesting it was the superlative days in effect of her wanting to remember, however she has vast pessimistic views on cousin Kate showing antagonism and discontent. One wants to retain information and one wants to overlook. On another point of view they are both dismal people as on is saddened as they want to forget and has something there that is going to remind them of it, "Cousin Kate" and the other "I wish I could remember" is upset while they cant memorize the thing they want to recall. They are equally from a female perspective, which is strange as the author, Christina Rossetti is a female and they usually write from a male point of view. My personal view on 'Cousin Kate' is that it is a heartbreaking account and shows immense sentiment furthermore with 'I wish I could remember' I didn't really enjoy this poem it was very tedious and it wasn't very 'to the point' of who what they forgot. ...read more.