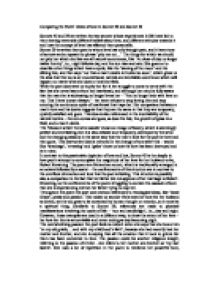 Christine Rosetti. Comparing the Poets Views of Love in Sonnet 29 and Sonnet 43

Comparing the Poets' views of love in Sonnet 29 and Sonnet 43 Sonnets 43 and 29 are written by two women whose experiences in life have led to them having extremely different beliefs about love, and different attitudes towards it and how the concept of love has affected them personally. Sonnet 29 is written by a poet to whom love has only brought pain, and it has a tone of sorrow as she repeats the phrase 'pity me not...' The things for which we should not pity her which she lists are all natural occurrences, like 'At close of day no longer walks the sky', i.e., night follows day, and the sun rises and sets. She goes on to describe other things which have a cycle, like the 'waning of the moon' and the ebbing tide, and then says 'nor that a man's desire is hushed so soon', which gives us the idea that this too is an unconditional, natural and inevitable occurrence which will happen no matter what she does or how she feels. ...read more.

This destructive idea is mirrored in the change of tone after this - words like 'wreckage', 'strewing' and 'gales' show us how the love has been destroyed and is in ruins. In contrast to this pessimistic depiction of love and l**t, Sonnet 43 is the deeply in love poet's attempt to contemplate the magnitude of her love for her husband-to-be, Robert Browning. The poem is a Petrarchan sonnet, which is traditionally arranged in an octave followed by a sestet - the confinements of this structure are in contrast to the overflow of emotion and love that the poet is feeling. This structure is possibly also a comparison to the fact that her father did not approve of her marriage to Robert Browning, so the confinements of the poem struggling to contain the cascade of love that she is experiencing mirrors her father trying to stop her. Throughout the poem the poet uses various references to theological ideas, like 'Ideal Grace', praise and passion. ...read more.

The passion could be another religious insight, referring to the passion of Christ - she refers to her mother and brother as 'my lost Saints'. She uses a lot of repetition in the poem to reinforce her powerful love, especially repeating the words 'I love' three times, all emphatically placed at the beginning of three corresponding lines. The biggest idea about love expressed in Sonnet 43 is how ongoing and permanent it is, and how to every extent possible she will always love him - to every confinement, the 'depth and breadth and height my soul can reach'. At the end she even suggests that her love is so powerful that it will go on even after she dies. The poem gives a much more positive view of love than the one in sonnet 29, in which there is a sadder tone as the poet realizes that her heart will never learn that love, like l**t, is not a permanent thing and comes and goes in a natural inevitable cycle. She suggests that a man's love is incapable of lasting forever. ...read more.