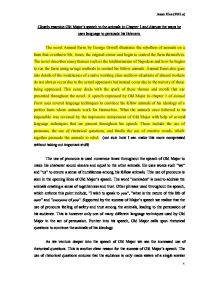 Closely examine Old Major's speech to the animals in Chapter 1 and discuss the ways he uses language to persuade his listeners. The novel Animal Farm by George Orwell illustrates the rebellion of animals on a farm that overthrow Mr. Jones, the original owner and begin to control the farm themselves. The novel describes many themes such as the totalitarianism of Napoleon and how he begins to run the farm using savage methods to control his fellow animals. Animal Farm also goes into details of the weaknesses of a na�ve working class and how situations of abused workers do not always occur due to the actual oppressors but instead occur due to the naivety of those being oppressed. This essay deals with the spark of these themes and motifs that are presented throughout the novel. A speech expressed by Old Major in chapter 1 of Animal Farm uses several language techniques to convince his fellow animals of his ideology of a perfect farm where animals work for themselves. ...read more.

This is another clear reason for the success of Old Major's speech. The use of rhetorical questions ensures that the audience is only made aware of a single answer that may exist. This leads to a single opinioned audience. There are several examples of when these questions are asked within the speech. Exemplified here "in return for your four confinements and all your labor in the field, what have you ever had except your bare rations and a stall?" and "is it not crystal clear, then, comrades that all the evils of this life of ours spring from the tyranny of human beings?" and finally in a question as simple as "what must we do?" All of these rhetorical questions are utilised to focus the audience on a sole idea. These quotes enable the closed mind thinking of the audience. Old Major sometimes also answers the question for his audience leaving them stunned and making them accept his words even more due to the hesitance of the audience to think outside of what has been said. ...read more.

Jones which causes acceptance of the fact that they were abused. Finally poignant words such as, "free", "rich", "prosperity" and "unity", are once again used to encourage and hearten his audience. Utilization of the aforementioned inspiring words allows for effective persuasion within the animals. Major, through well structured ideas and the use of emotive words within his speech better communicates his ideology toward the target audience. The language techniques that are used throughout the speech of Old Major written by George Orwell are key factors that persuade the audience. These techniques include the use of pronouns, the use of rhetorical, and finally the use of emotive words. Jointly these techniques that are used in the speech allow for the success of Old Major's speech leading to the persuasion of the animals. We are able to see this accomplishment through, "at this moment there was a tremendous uproar" which "threw the animals into the wildest excitement". The success of Old Major's speech through the continuous use of persuasion is marked by the rebellion against their current leader Mr. Jones. ?? ?? ?? ?? Jason Dias (9MLo) 1 ...read more.