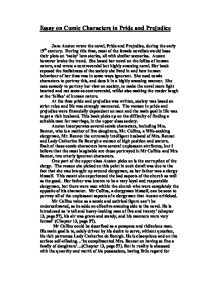 Comic Characters in Pride and Prejudice

Essay on Comic Characters in Pride and Prejudice Jane Austen wrote the novel, Pride and Prejudice, during the early 19th century. During this time, most of the female novelists would base their plots on 'tacky' love stories, all with similar scenarios. Austen however broke the trend. She based her novel on the follies of human nature, and wrote a controversial but highly amusing novel. Her book exposed the foolishness of the society she lived in and how human behaviour of her time was in some ways ignorant. She used comic characters to portray this, and does it in a highly amusing manner. She uses comedy to portray her view on society, to make the novel more light hearted and not seem as controversial, whilst also making the reader laugh at the 'follies' of human nature. At the time pride and prejudice was written, society was based on strict rules and life was strongly mannered. The women in pride and prejudice were financially dependant on men and the main goal in life was to get a rich husband. This book picks up on the difficulty of finding a suitable man for marriage, in the upper class society. Austen incorporates several comic characters, including Mrs. Bennet, who is a mother of five daughters, Mr. Collins, a Wife-seeking clergyman, Mr. Bennet the extremely intelligent husband of Mrs. ...read more.

Another instance of when Mr Collins causes a nuisance is when he persuades Elizabeth in dancing with her at the netherfield ball. Even when moral right being of attending the ball is questioned, he replies... ' I assure that a ball of this kind...would have no evil tendency'...He also goes on to ask Elizabeth if he could have the first two dances with her, which puts her in an awkward position as she is hesitant to have anything to do with Mr Collins. Mr Collins first proposal to Elizabeth portrays him as a selfish ignorant man. He asks her to marry him as if she has no right to say no to his proposal. He is made to look pompous and ignorant, which Elizabeth finds highly amusing. His only intentions in marrying are clearly seen to improve his social status and set an example. There is no real feeling or love in his intentions in proposing to Elizabeth. He eventually proposes to Charlotte, which proves his shallow mindedness and his frantic pursuit in getting married as quickly as possible. The shallowness of his Christianity is expressed in his critical letter to Mr Bennet, which shows no compassion or forgiveness towards Lydia. This picks up on the point of Austen criticising the Clergymen for not sticking to their duties of representing the church. ...read more.

She uses a lot of exclamation marks in her verbal communication and most of it is emotional drivel, as she says the first thing that comes into her mind. It can also be noted that her opinion is easily swayed as she has a fickle personality... 'Good gracious! Lord bless me! Dear me! Mr Darcy! ... my sweetest Lizzy how rich and how great you will be!'...when before this she had definite hatred for him and openly insulted him. Her daughter Lydia can be seen to have a similar personality to that of her mother, and her out bursts at the balls that the family attends are the same as her mothers. Lydia is also the first one to marry which shows how selfish she is, which is also similar to that of her mother. Overall I think that Austen even though she mocked her characters at times, had a very serious point to make about the society in which she lived in. In her novel the main class she criticised were the social climbers, like Mr Collins and Mrs Bennet. In her book she gave an insight on how the personal lives, of those upper classes of the Georgian era, functioned. She presented those facts in a highly amusing format, which appealed highly to the reader and made it a very enjoyable read. Her book has been taken very seriously and has had replies claiming that comic characters like Mr Collins actually exist and have the same bad attributes as him. ...read more.