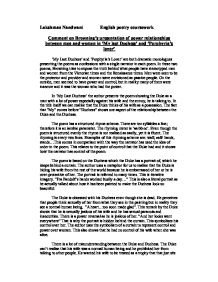 Comment on Browning's presentation of power relationships between men and women in 'My last Duchess' and 'Porphyria's lover'.

Lakshman Nandwani English poetry coursework Comment on Browning's presentation of power relationships between men and women in 'My last Duchess' and 'Porphyria's lover' 'My Last Duchess' and 'Porphyria's Lover' are both dramatic monologues presenting the poems as confessions with a single narrator in each poem. In these two poems, Browning tries to expose the truth behind what people have stereotyped men and women from the Victorian times and the Renaissance times. Men were seen to be the protector and provider and women were envisioned as passive people. On the outside, men seemed to have power and control, but in reality many of them were insecure and it was the woman who had the power. In 'My Last Duchess' the author presents the poem showing the Duke as a man with a lot of power especially against his wife and the envoy, he is talking to. In the title itself we can realise that the Duke thinks of his wife as a possession. The fact that "My" comes before "Duchess" shows one aspect of the relationship between the Duke and the Duchess. The poem has a structured rhyme scheme. There are ten syllables a line; therefore it is an iambic parameter. The rhyming meter is 'aa bb cc'. Even though the poem is structured evenly the rhyme is not realised as easily, yet it is fluent. The rhyming is every two lines. ...read more.

The phrase that said that the Duke gave orders to kill the Duchess is ambiguous. The Duke never stated that he killed her or that he planned to kill her. The Duchess's death is un-clarified because it isn't stated that the Duke killed her. If the painting of the Duchess represents her, then the Duke figuratively now has ultimate control over her. He decides who is to view the painting and when they are to view it "The curtain I have drawn for you, but I". Robert Browning has used a male narrator's voice throughout both poems to show that men were the traditional bearers of power in gender relationships. Men are looked as the active agent and women are seen as the passive, although it is a totally different case in modern times. Nowadays women have just as much rights as men do and this contrast makes the issue of power more effective. Also he is the only one talking. The envoy is another person involved in the poem but he doesn't say a word showing the Duke has control over him as well. "Who'd stoop to blame this sort of trifling?" All the questions phrased to the envoy are rhetorical. The last three lines are related to power which the Duke desires and believes he has a right to have. "Notice Neptune, though, taming a sea-horse, thought a rarity, which Claus Innsbruck cast in bronze for me!" ...read more.

"Laugh'd the blue eyes without a stain." There is another s****l image mentioned however disturbing it may be. "Blush'd bright beneath my burning kiss" He doesn't realise perhaps that could be the blood that rush up when he strangled her. The confusion created by how he treats this dead woman is effective. Because she is dead he knows that he controls her. Here there is a power reversal. He feels he has done her a favour by killing her. Now she can't reject him. The last sentence is related to God. "And yet God has not said a word!" This shows he does not feel guilty for what he has done. It is sort of a minor religious conflict with God because he is threatening God in one sense. Browning relates to God as we think this is very strange act the character has committed. The meaning is always powerful when God is mentioned as God is an ultimate. The character is not getting punished for what he has done. In both poems there is an occurrence of death of the women significantly suggesting that men had more power as they were involved in the murder of their wives or loves. In 'My Last Duchess' the Duke hides the portrait of his wife behind a curtain and in 'Porphyria's Lover' the man hides the woman in his mind. In the female aspect of the poem they were socially superior to the men, who seemed to be insecure and lonely. In both poems the women s******y manipulated the men. This is another power reversal in these poems. ...read more.