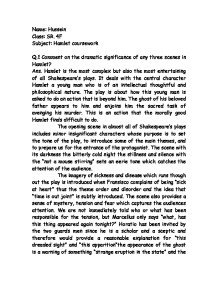 Comment on the dramatic significance of any three scenes in Hamlet?

Name: Hussein Class: SR. 4F Subject: Hamlet coursework Q.1 Comment on the dramatic significance of any three scenes in Hamlet? Ans. Hamlet is the most complex but also the most entertaining of all Shakespeare's plays. It deals with the central character Hamlet a young man who is of an intellectual thoughtful and philosophical nature. The play is about how this young man is asked to do an action that is beyond him. The ghost of his beloved father appears to him and enjoins him the sacred task of avenging his murder. This is an action that the morally good Hamlet finds difficult to do. The opening scene in almost all of Shakespeare's plays includes minor insignificant characters whose purpose is to set the tone of the play, to introduce some of the main themes, and to prepare us for the entrance of the protagonist. The scene with its darkness the bitterly cold night the stillness and silence with the "not a mouse stirring" sets an eerie tone which catches the attention of the audience. The imagery of sickness and disease which runs though out the play is introduced when Fransisco complains of being "sick at heart" thus the theme order and disorder and the idea that "time is out joint" is subtly introduced. The scene also provides a sense of mystery, tension and fear which captures the audiences attention. We are not immediately told who or what has been responsible for the tension, but Marcellus only says "what, has this thing appeared again tonight?" ...read more.

He enquires anxiously "have you heard the argument? Is there no offence in it?" and Hamlets reply that "they do not but jest, poison in jest. No offence in the world" is a pointed remark which reveals to the audience that Claudius suspects that he is being targeted. It is very appropriate that Claudius who is nothing but a lying politician and a murderer could be revealed through the deception of play acting. It serves to emphasise the fact that every thing about Claudius is deceptive. The deal Claudius is very different from the appearance of a concerned step father and capable king. Hamlet asks his mother how she finds the play especially the Dukes wife who speaks at length about her loyalty and love at faithfulness to her husband. Gertrude remarks to Hamlet about this that "the lady doth protest too much, me thinks". This also reveals the falseness and the hypocrisy of both the lady in the play and Gertrude both pretended to be loyal to their husbands but within two months of their husband's death they married another man. The scene where the player "pours the poison in the kings ears" is too much for Claudius. He calls out for lights "give me some light. Away!" when the performance breaks up Hamlet is overcome with excitement. He overcomes that Claudius is guilty and exclaims "I will take the ghosts words for a thousand pounds". ...read more.

He has my dying voice." Horatio's touchy farewell to his friend "Now cracks a noble heart. Good night, sweet prince, and flights of angels sing thee to thy rest!" expresses the feelings of the audience. We are made forcefully aware of Hamlet's nobility and the play comes to a fitting end when Horatio explains to the shocked court all the events that had led to the final tragedies. Fortinbras' words about Hamlet "for he was likely, had he been put on, to have proved most royal. Brings the play to dignified conclusion young Fortinbras recovers the land lost by his father to old Hamlet and in Addition he also gains the throne of Denmark. The play Hamlet is the longest of Shakespeare's plays. It is the tragedy of a young man who is unable to be decisive. Hamlet dies because of the fatal flaw in his character but at his death we are left with an intense feeling of loss because Shakespeare has shown us through the several scenes all the true greatness of this promising young man. Hamlets love and loyalty towards his parents is great. The sense of injustice and the great evil that was done to his father made him almost unbalanced but what was unbearable to him was the betrayal of his mother by marrying his wicked uncle. At the end of the play we are left with a feeling of sadness and grief for a brilliance young man who was treacherously killed by wickedness. ...read more.