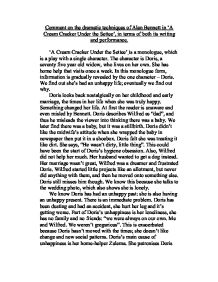 Comment on the dramatic techniques of Alan Bennett in 'A Cream Cracker Under the Settee', in terms of both its writing and performance.

Comment on the dramatic techniques of Alan Bennett in 'A Cream Cracker Under the Settee', in terms of both its writing and performance. 'A Cream Cracker Under the Settee' is a monologue, which is a play with a single character. The character is Doris, a seventy five year old widow, who lives on her own. She has home help that visits once a week. In this monologue form, information is gradually revealed by the one character - Doris. We find out she's had an unhappy life; eventually we find out why. Doris looks back nostalgically on her childhood and early marriage, the times in her life when she was truly happy. Something changed her life. At first the reader is unaware and even misled by Bennett. Doris describes Wilfred as "dad", and thus he misleads the viewer into thinking there was a baby. We later find there was a baby, but it was a stillbirth. Doris didn't like the midwife's attitude when she wrapped the baby in newspaper then put it in a shoebox. ...read more.

She patronises Doris and keeps threatening her with Stafford House. Doris feels she is a prisoner, referring to "the Zulema regime". All the information I have considered is gradually revealed to the audience using a number of dramatic techniques. Doris uses non-standard English, like "them's her leaves". She also has a local dialect and uses words like "squatting" instead of placing. This establishes her character: she is probably working class but when she uses words like "surreptitious" and "gregarious" Bennett suggests she is quite clever. Bennett emphasises things about Doris by using recurrent themes. Doris has a hygiene obsession. She talks about cleanliness a lot and is prejudiced against people in Stafford House because she thinks they are unclean. She talks about her husband Wilfred frequently and speaks to the photo of him. Another technique Bennett uses is reported speech: this brings in other characters so the monologue is more interesting. An example of this is Zulema - we form our impression of the character from what Doris tells us she says: "you're on trial here". ...read more.

All these are very practical clothes. Another technique used in the performance is the lighting. In the morning Doris is sitting in front of the window and she is backlit. When she is against the sideboard she is away from the window so it is less bright. Doris later moves to the door where it is darker still. In the evening she is sat by the sofa and the room is orange due to the streetlights. There are two dramatic functions of the lighting. One of them is to indicate the passage of time. Doris does not tell the viewer what time it is. The second is as a metaphor: the last stage direction is 'light fades', and this could indicate Doris's death. The last two dramatic techniques of the performance are the use of music and the camera. At the start the music sounds sad and lonely - this sets the mood straight away as it is depressing. The instruments are piano and brass, solo instruments that are alone, like Doris. There is a single camera which is linked to the music, zooming in to emphasise emotional moments. The camera does not move around Doris so any movement is effective. Chris Jones. ...read more.