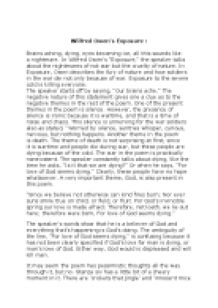 Commentary on &quot;Exposure&quot; by Wilfred Owen

﻿Wilfred Owen's Exposure : Brains aching, dying, eyes becoming ice, all this sounds like a nightmare. In Wilfred Owen's "Exposure," the speaker talks about the nightmares of not war but the cruelty of nature. In Exposure, Owen describes the fury of nature and how soldiers in the war die not only because of war. Exposure to the severe cold is killing everyone. The speaker starts off by saying, "Our brains ache." The negative nature of this statement gives one a clue as to the negative themes in the rest of the poem. One of the present themes in the poem is silence. However, the presence of silence is ironic because it is wartime, and that is a time of noise and chaos. This silence is unnerving for the war soldiers also as stated, "Worried by silence, sentries whisper, curious, nervous, but nothing happens. ...read more.

Either way, God would is displeased and will kill man. It may seem the poem has pessimistic thoughts all the way through it, but no. Stanza six has a little bit of a cheery moment in it. There are 'crickets that jingle' and 'innocent mice rejoicing.' This happens when the soldiers are dozing and in their dreams they think about their home and the happy life they had before the war. This stanza does an excellent job of showing the extreme contrasts between the soldiers' good times at home and their misery during the war. Right after the rejoicing mice, the sad and somber mood of the poem returns by saying, "Shutters and doors, all closed: on us the doors are closed," Imagery of nature is used throughout the poem, since much of the poem is based on nature. ...read more.

The resonating of the consonant sound 'r' marks the alliteration and the 'r' sound also reminds one of the "rat-ta-tat" of gunfire during a war. Yet another device used is a simile. For example, "Watching, we hear the mad gusts tugging on the wire, Like twitching agonies of men among its brambles." This simile not only shows natures control over the situation but shows the agonies of men, what they are going through in the unforgiving cold. This simile almost makes one hear the screaming or moaning of the men in agony. Clearly, Wilfred Owen tries to show not only the suffering caused by the war, but also by nature and God. Owen succeeds in keeping the sad and negative mood alive throughout the poem, even after the short cheery moment. Owen drifts away from the topic of war, and still is able to tell the misfortune of men during exposure to nature at time of war. ...read more.