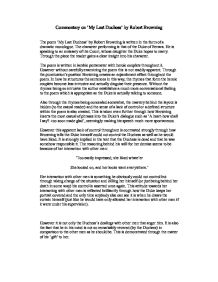 Commentary on 'My Last Duchess' by Robert Browning

Commentary on 'My Last Duchess' by Robert Browning The poem 'My Last Duchess' by Robert Browning is written in the form of a dramatic monologue. The character performing is that of the Duke of Ferrara. He is speaking to an emissary of the Count, whose daughter the Duke hopes to marry. Through the piece the reader gains a clear insight into his character. The poem is written in iambic pentameter with heroic couplets throughout it. However without carefully examining the poem this is not readily apparent. Through the punctuation's position Browning creates an enjambment effect throughout the poem. In how he structures the sentences in this way, the rhymes that form the heroic couplets become less intrusive and actually disguise their presence. Without the rhymes being so intrusive the author establishes a much more conversational feeling to the poem which is appropriate as the Duke is actually talking to someone. Also through the rhymes being concealed somewhat, the mastery behind the layout is hidden (to the casual reader) and the sense of a lack of control or a defined structure within the poem is also created. This is taken even further through how Browning inserts the most casual of phrases into the Duke's dialogue such as 'A heart-how shall I say? ...read more.

The text, page 629 and 630, tells us that the setting in �gMy Last Duchess�h displays a valuable art form that exposes his greed and cruelty. �gDover Beach�h demonstrates changeability and impermanence. The speaker�fs solution is to establish personal fidelity as a fixture against change, dissolution, and brutality. Even though the text tells us the main use of setting in these two poems, I believe that many individual words used in the poems help describe the surroundings and the feelings that the speaker is trying to get across. Robert Browning, the author of �gMy Last Duchess�h, uses the setting to show the Dukes greed, cruelty, and jealousy. The development of the setting begins with the Duke showing an agent for the Count of Tyrol the curtained picture of his deceased Duchess. Count of Troy sent an agent in order to see if the Duke is worthy to marry his daughter. The fact that he keeps the picture behind closed curtains and deems it a privilege to view the Duke�fs last Duchess illustrates his possessiveness and greed. �gShe thanked men--good! But thanked somehow--I know not how--as if she ranked my gift of nine-hundred-years-old name with anybody�fs gift�h. This line lends to the setting by showing his greed and how he places himself above other men according to his possessions and can not believe that she had the audacity to place �gthe Duke�h in the same category as other men. ...read more.

Lines 20 and 21, �gthe Sea of Faith, was once, too, at the full, and round earth�fs shore,�h describe the erosion of not only the land but the relationship of the couple, too. The wind, waves, and sounds that you hear along the beach, obviously the physical aspects of the setting represent the emotional ties of the lovers. The speakers description of a land of dreams having, �gneither joy, nor love, nor light, nor certitude, nor peace, nor help for pain:�h is one were the relationship has nothing hidden and the roar of the waves on the beach reflect relaxation instead of confusion and controversy between the couple. Being confused the couple does not know if they are fighting to keep the relationship going or fighting in order to end the relationship. The setting described in the last three lines using words such as struggle, flight, clash, and darkling plan allows the reader to understand the confusion in the couples life Where Browning uses the setting to reveal the characters greed and cruelty, Arnold uses the setting in �gDover Beach�h to expose the lover�fs struggle in their relationship. Both poems�f settings reveal the weaknesses of their characters and allow the reader to draw a mental picture of the situations faced by the characters in the poems�f. The use of setting in a poem emphasizes the author words and character development. Setting not only describes the physical surroundings; it also describes the mental though of the characters in a poem. . ...read more.