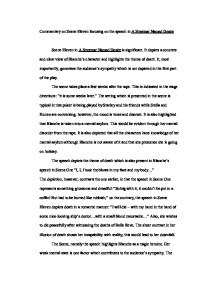 Commentary on Scene Eleven focusing on the speech in A Streetcar Named Desire.

Commentary on Scene Eleven focusing on the speech in A Streetcar Named Desire Scene Eleven in A Streetcar Named Desire is significant. It depicts a concrete and clear view of Blanche's character and highlights the theme of death. It, most importantly, generates the audience's sympathy which is not depicted in the first part of the play. The scene takes place a few weeks after the r**e. This is indicated in the stage directions: "it is some weeks later." The setting which is presented in the scene is typical in that poker is being played by Stanley and his friends while Stella and Eunice are conversing; however, the mood is tense and discreet. It is also highlighted that Blanche is taken into a mental asylum. This would be evident through her mental disorder from the r**e. ...read more.

The sheer contrast in her illusion of death shows her incapability with reality, this would lead to her downfall. The Scene, namely the speech highlights Blanche as a tragic heroine. Her weak mental state is one factor which contributes to the audience's sympathy. The illusion of her death, to die romantically shows her apartness from reality, which again builds up sympathy for her. Her mental disease would be as a result of the r**e and as indicated in her speech in Scene One the loss of Belle Reve. These facts portray sympathy for Blanche and could be labeled as a tragic heroine. The speech plays significantly in depicting aspects of Blanche's character. It highlights her educated and refined temperament in that the speech is brought in a very romantic and poetic form. ...read more.

The last part of the speech: "And I'll be buried at sea sewn up in a clean white sack and dropped overboard - at noon - in the blaze of summer..." depicts cleanliness and purity, complete irony to her end. The tone throughout the scene is relatively tense; this is seen through the character's dialogues. In the speech, however, the mood is very romantic where death is portrayed in clean images. Following the speech, the mood is contrasted as the doctor and matron appear. The characters seem emotionally detached and a sombre and tense tone is depicted. The specific tone depicted through Blanche greatly differs from the tense mood depicted in most of Scene Eleven; this could prove her apartness from reality. The final scene plays a significant role in portraying Blanche's characteristics; however the speech, itself, is of much significance. It portrays Blanche as a tragic heroine and would allow the audience to sympathize with her. ...read more.

This essay responds to the task well. There is a clear understanding of the significance of the scene in the context of the play, and this is what examiners are looking for when they set questions on a particular scene ...

This essay responds to the task well. There is a clear understanding of the significance of the scene in the context of the play, and this is what examiners are looking for when they set questions on a particular scene or extract. It is difficult to build an argument based on one element, but I feel this essay manages to look at speech and form a justified judgement. I particularly liked how there was a contrast to Blanche's speech in previous scenes, as this shows the ability to analyse the whole text. I would've liked to have seen more emphasis placed on the audience response. The introduction states it builds the audience's sympathy, but this idea isn't explored much throughout the essay.

The analysis here is sound. There is a good knowledge of the text displayed through the number of quotes included. These are well embedded allowing for a flowing argument. I feel as if the essay is trying to explain Blanche's speech, rather than analyse it. There is a key difference in simply interpreting what Williams is having Blanche say, and looking at the language used, or the way she talks on stage (looking at stage directions). The latter will gain credit for analysis, for example by looking at Williams' use of Blanche's monosyllabic language to show her loss of control. The foundations for this sort of analysis is here, but there just needs to be a further exploration of why Williams' constructs Blanche's speech to change in this scene. I would note that talking about her tragedy and the climax of the play will suit well with any analysis of her speech. Sometimes the essay is retelling the plot, for example the paragraph after the introduction. This is a waste of time in an exam, and words in a piece of coursework. You will not gain credit for simply having knowledge of the play - you must analyse Williams' techniques. For example, why has he chosen to have this scene happen a few weeks after the rape is a question I'd address.

The structure here is good. The introduction is concise and offers a clear line of argument. It is nice at GCSE level not to see an irrelevant paragraph full of context! I liked how this essay underlined "A Streetcar Named Desire" as this is the convention examiners are looking for. I've gotten scripts back where i've done this, and it's always had a positive comment contributing to quality of writing assessment objectives. Spelling, punctuation and grammar are fine.