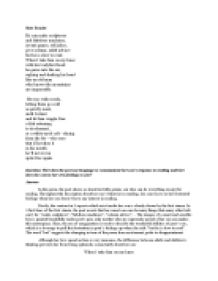 ﻿Slow Reader He can make sculptures and fabulous machines, invent games, tell jokes, give solemn, adult advice- but he is slow to read. When I take him on my knee with his Ladybird book he gazes into the air, sighing and shaking his head like an old man who knows the mountains are impassable. He toys with words, letting them go cold as gristly meat, until I relent and let him wiggle free: a fish returning to its element, or a white-eyed colt - shying from the bit ? who sees that if he takes it in his mouth he?ll never run quite free again. Question: How does the poet use language to communicate her son?s response to reading and how does she convey her own feelings to you? Answer: In the poem, the poet shows us about her little genius son who can do everything except for reading. ...read more.

When I take him on my knee with his Ladybird book he gazes into the air, sighing and shaking his head like an old man who knows the mountains are impassable. The poet tries to reach her son but his action makes her down; it is a such a drag on her thinking. Listing three verbs which suggests the negative effect, she conveys to us how languid her son is in reading book. Using the simile, poet portrays image of her son like an old, thoughtful man knowing that the mountains are impassable. Facing with book her son is deactivated. Through the first stanza, mother?s feeling goes down from the top to the bottom of a mountain when she told us about her son. The contrast between what her son can do and reading puts her in tumult. Secondly, as evidence, the second stanza is an infallible description about her son?s response to words. ...read more.

He enjoys his freedom like the fish returns to its element. The poet exhaled using this idiom to describe her anxiety when her son became active again after hardcore reading. Here, the mother (poet) seems to find out the inscrutable behavior of her son that makes him fed up with reading. The image of a young male horse suggests the using of metaphor. The poet?s son is forced to read and the freedom is out like the young male horse when he is bound by the bit ?he?ll never run quite free again.? At this point, the poet emphasizes that her son seem to be regenerated after the reading section, which pull her down when she tries her best to help her son. The poem is written the heart of a mother who spends all her love to him, tries to help him ceaselessly while her son can?t show his positive behavior to reading. It reflects the a difference between the adult perspective and children point of view. ...read more.