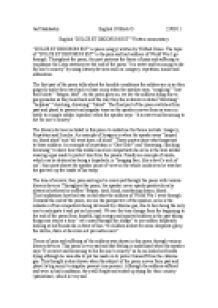 Commentary. The topic of DULCE ET DECORUM EST is the pain and hurt soldiers of World War I go through

﻿Jad Shakhashir English 10 Block G 22/03/11 English ?DULCE ET DECORUM EST? Written commentary ?DULCE ET DECORUM EST? is poem (elegy) written by Wilfred Owen. The topic of ?DULCE ET DECORUM EST? is the pain and hurt soldiers of World War I go through. Throughout the poem, the poet portrays the theme of pain and suffering to emphasize the Latin statement at the end of the poem ?It is sweet and becoming to die for one?s country? by using literary devices such as: imagery, repetition, simile and alliteration. The first part of the poem talks about the horrible conditions the soldiers are in as they gingerly make their way back to base camp when the speaker says, ?coughing? ?lost their boots? ?fatigue, deaf?. ...read more.

An example of Imagery is when the speaker says ?limped on, blood shod? and ?all went lame, all blind?. These quotes show what happened to these soldiers. An example of repetition is ?Gas! Gas!? and ?drowning, chocking drowning? to show how this soldier sees his compatriots die as he is the soul soldier wearing a gas mask to protect him form the poison. Finally an example of simile, which can be deduced as being a hyperbole, is ?hanging face, like a devil?s sick of sin?, this quote shows the speaker point of view on the whole incident as he watches the gas tear up the inside of his troop. The tone of sorrow, fear, pain and regret is conveyed through the poem with various literary devices. ...read more.

soldier helplessly looking at his friends die in front of him ?to children ardent for some desperate glory, the old lie, dulce et decorum est pro natria mori?. Theme of pain and suffering of the soldiers was shown in this poem through various literary devices. This poem is very sad and that feeling is underlined when the speaker says ?It is sweet and becoming to die for one?s country? as he on looks his friends dying although he was able to put his mask on to protect himself from the chlorine gas. This thought is also shown when the subject of the poem moves from past and plural (a big army) to singular present (one person). Although the soldiers suffered and were in bad conditions, they still fought and ended up dying for their country (patriotism), which is very sad. ...read more.